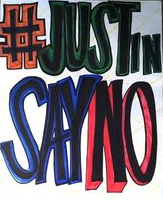 The Buckhead section of Atlanta does not want Justin Bieber as a neighbor.

According to ajc.com, the pop star has been in Atlanta, which he calls his second home, for several weeks now working on a new recording project. He’s popped up at an east Cobb County ice rink, an area Zaxby’s, the Phipps Plaza movie theater, partying with other artists including Jermaine Dupri, Diddy and Rick Ross and in the studio with artist T.I.

“Good to be back,” he posted soon after his arrival. “Focused on building up positive energy.”

The page, started the other day by the Buckhead Neighborhood Coalition, has attracted hundreds of supporters.