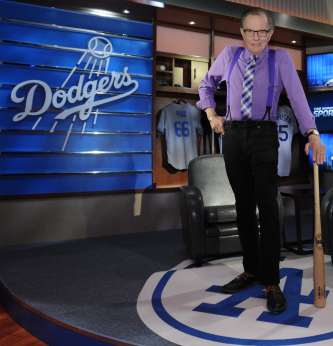 Larry King, a longtime fan of the Los Angeles Dodgers, will host a series for the team’s 24/7 television network called “Larry King at Bat.”

SportsNet LA made the announcement Tuesday, according to Variety.

Debuting March 18 at 7 p.m., the hour-long show will feature interviews with celebrities, baseball legends, Dodger personalities and other experts.

“In addition to being a talented and renowned TV personality, Larry King is an incredible Dodger fan,” said Dodger president and CEO Stan Kasten. “We are so excited to officially bring him into the Dodger family.”

Said King: “With my love of sports and my interviewing skills, I think it will be a happy combo.”

SportsNet LA, which launched Tuesday, is the result of a recent 25-year, $8.5 billion deal between the club and Time Warner Cable.
Posted 3:40:00 AM