WBBR's programming schedule included programs in several languages, including Yiddish and Arabic.
Judge Rutherford later expanded the radio operations into ownership of at least 7 stations in the United States and Canada, including outlets in the Chicago, Toronto, and Oakland areas.

On August 5, 1928, Rutherford broadcast on a chain of 96 stations, the largest radio network organized till that time, according to New York Radio History.  But, Rutherford's attacks on other religions led many stations to drop his programs, sometimes cutting him off before he was finished. 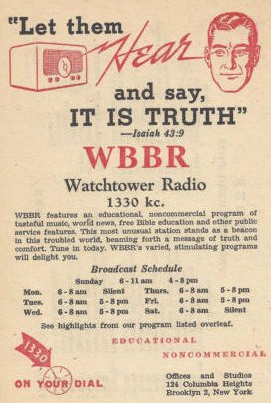 In 1941, WBBR's license was transferred to the Watchtower Bible And Tract Society, the religion's publishing arm, and in March of that year, WBBR (and its share-time partners) moved to 1330 AM. In 1946, power was increased to 5000 watts.

In 1957 the Watchtower Bible And Tract Society sold its station to H. Scott Killgore's Tele-Broadcasters Of New York Inc. for $133,000.  Call letters were changed to WPOW on May 1, 1957, the religious talks and placid string and organ music disappeared, and the new station embarked on a series of changes that would repeatedly make it something of a pioneer in New York area radio.

On the morning of September 5, 1957, WPOW became the first New York station to play a form of rock music during most of its daily schedule.

The remainder of WPOW's schedule was filled with easy-listening music, paid religious programs including "Glad Tidings Tabernacle" and "The Hebrew Christian Hour".

Under its share-time arrangements, WPOW often broadcast at unusual times, occasionally signing on at 3a and then leaving the air while the morning drive-time audience was at its peak.

In February 1958, the station moved to foreign-language programming, mostly Spanish but also including some Polish, French, Armenian and Byelorussian.

In July 1959, Killgore sold WPOW for $250,000 to John M. Camp, an Illinois-based advertising agent and broker of religious broadcast time.  In 1973, Camp purchased share-time station WHAZ in Troy NY and starting operating it as a daytimer, opening up Monday nights for WPOW.

In 1979, WPOW's other share-time station on 1330 AM, WEVD, was sold to Salem Media, and became WNYM.  In the early 1980's, Salem bought out WPOW for $4 million, most of that sum simply for the Staten Island real estate.

On December 31, 1984, WPOW signed off without ceremony, and the last time-sharing arrangement in New York AM radio came to an end.

In 1987...Radio personality Larry King was stricken with a heart attack.

Jim Connors earned thirteen Gold records for discovering artists during his career including Harry Chapin and his hit song "Taxi". Chapin later went on to write "W*O*L*D," a song inspired by Connors' life. This song was based on a phone call Harry overheard while in studio with JC at WMEX-Boston. The men began discussing what life as a "jock" is like, which was Harry's inspiration for the hit song.

Connors also earned gold with Chuck Berry for "My Ding-a-ling," Wayne Newton for "Daddy Don't You Walk So Fast," Joe Simon for "Power of Love," and Mouth & MacNeal for "How Do You Do," along with many others, for exposing the songs to the mainstream audience.

Connors was well known amongst radio programmers of the 1960s and 1970s for his programming and promotional abilities along with his Think Sheet. The 'Think Sheet' was a monthly publication he wrote and distributed to fellow radio programmers making recommendations on airplay for new artists, along with jock jokes and trend analysis based on market research.

WJET Erie, Pennsylvania was his first official radio job outside of duties performed in the U.S. Air Force. At WJET, he held the title of Production Director for WJET Radio & WJET Television channel 24. Initially, he was the midday host for WJET and was rated #1 in the market ahead of the morning drive team. It wasn't long before JC was promoted to the AM drive shift.

After a long run at WJET, Connors was hired at WMEX in Boston, Massachusetts, where he was the Music Director and AM drive host. His daily program was consistently rated #1 in the New England marketplace in the early 1970s.

After having great success in Boston, and becoming nationally renowned by many record executives for his programming and promotional abilities, JC moved towards Erie, Pennsylvania to be closer to his children from his first marriage. The impact of Chapin's song "W*O*L*D" hit his ex-wife hard, as the local 'Jocks' in Erie would often take their shots at him and his life on air.

Soon he found an opening at WYSL in Buffalo, New York, where he could be closer to his children while working through some family concerns. Connors was the AM Drive host in Buffalo, NY.  JC had great success in Western New York, and on WYSL he frequently featured many of the well-known performers with whom he had connections.

While in Buffalo, JC met his second wife, and the couple would find out they were pregnant with their first of two children shortly before moving to Rochester, New York for a job at WROC as Operations Manager & AM Drive Host.

After the passing of his father, JC wanted to be back in New England with the rest of his family. He was offered a position with WCIB in Falmouth, Massachusetts and Cape Cod, Massachusetts where he was appointed Vice President of Operations and AM Drive Host, with multiple levels of on-air production responsibility.

His career in the northeastern United States soon came to an end, as he packed up and headed for another new beginning, on the Gulf Coast of Florida. While living in the Bay Area of Tampa, Florida JC frequently recorded commercials and appeared in numerous local spots.

His time in Florida was brief. On February 24, 1987, on a trip returning to Rhode Island, JC was killed in a car crash on I-95 in Greensville County, Virginia.

In 1991…Radio and television newsman/Vice President of ABC during the 1950s/TV quiz show host (What's My Line?, Who Said That?) John Daly died of cardiac arrest at 77.

In 2004..."Bubba The Love Sponge" was fired by Clear Channel Communications/Tampa.

On February 27, 2001, while on the air at WXTB in Tampa, Florida, Clem slaughtered and barbecued a wild Florida boar that had been captured by a professional hunter. Sound effects of hogs feeding were broadcast to lead listeners to believe the hog was being harassed and aggravated. Based on the incident Clem, his Executive Producer Brent Hatley, and two other people were charged with animal cruelty. The trial received coverage outside Florida including Court TV. All four defendants were acquitted by the jury.

The Federal Communications Commission (FCC) issued a Notice of Apparent Liability of $755,000 against four stations owned by Clear Channel Communications (including its flagship station, WXTB) on January 27, 2004 for objectionable segments of "Bubba the Love Sponge" . The fine consisted of the maximum of $27,500 for each of 26 airings of a segment plus $40,000 for record-keeping violations. The segments included graphic discussions about sex and drugs and according to the FCC were "designed to pander to, titillate and shock listeners". One segment featured the cartoon characters Alvin and the Chipmunks, George Jetson and Scooby-Doo discussing sexual activities.