Clear Channel Media and Entertainment announced today that Emmy-winning television and radio host, Ryan Seacrest, is celebrating 10 years of being on-air on 102.7 KIIS-FM, Los Angeles No. 1 Hit Music Station, as well as a decade of hosting American Top 40 with Ryan Seacrest.

In February 2004 Seacrest took the reigns as host of KIIS-FM's morning show and since then it has become No. 1 in Los Angeles and the most-listened-to morning show in Southern California. Broadcasting from Hollywood, Seacrest, Ellen K. and the on-air crew focuses on all aspects of the entertainment industry, highlighting and interviewing top talent from the worlds of music, film and television.

The top-rated music and entertainment news program airs Monday through Friday from 5-10:00 a.m. PST. In addition, on March 1 and 2, Seacrest will celebrate 10 years as host of the nationally syndicated No. 1 countdown show, American Top 40 with Ryan Seacrest, which is syndicated by Premiere Networks. 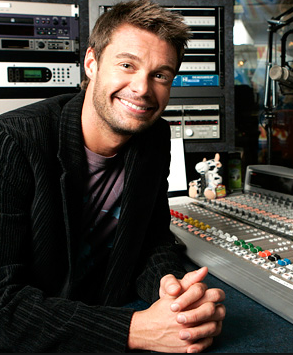 "Ten years have felt like ten minutes -- it has truly flown by. I'm so grateful to everyone at Clear Channel and for my dedicated KIIS and AT40 teams, as all of our success has so much to do with their passion and hard work," said Seacrest. "Radio has been my dream since I was a kid, and I'm still pinching myself every day I'm on the air. I love laughing with our listeners, hearing their stories, and being part of their daily lives."

"Back in 2004 when we began looking for a new morning show Ryan was doing afternoons at KYSR. It's hard work to establish a new morning show, but Ryan had full confidence he could do the job. His entire team threw everything they had into the show and it became the No. 1 show in Los Angeles in less than a year and today the most listened to morning show for 10 straight years," said John Ivey, Senior Vice President of Programming, CCM+E/LA Program Director of KIIS-FM.
Posted 9:52:00 AM