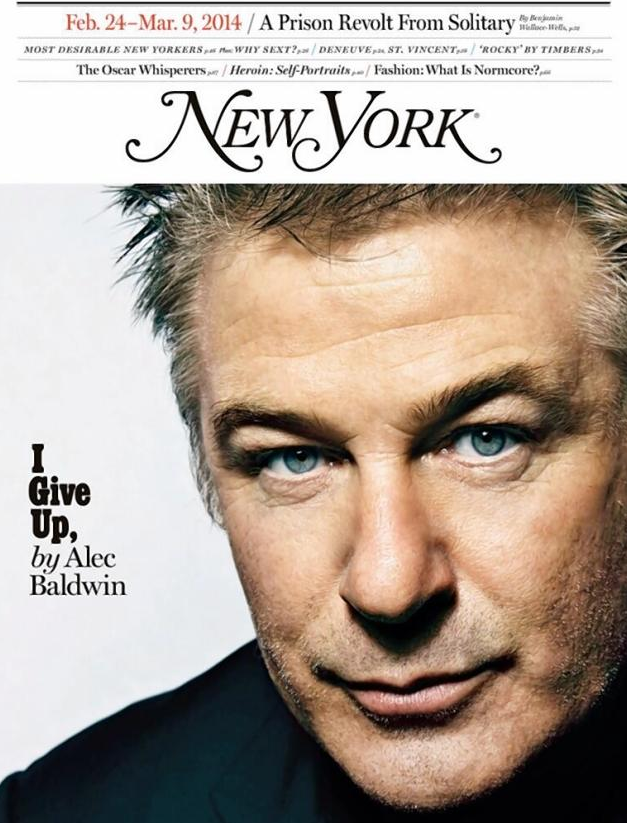 Alec Baldwin doesn't want to be famous anymore. The actor has written an essay for the new issue of New York magazine called "I Give Up" where he lashes out against the media and claims he will be quitting public life.

Alec writes, "I've lived this for 30 years, and I'm done with it. I loathe and despise the media in a way I did not think possible. I'm aware that it's ironic that I'm making this case in the media -- but this is the last time I'm going to talk about my personal life in an American publication ever again. I haven't changed, but public life has."

The 55-year-old goes on to address his tumultuous year fighting with the paparazzi and alleged homophobia saying, "Am I a homophobe? Look, I work in show business. I am awash in gay people, as colleagues and as friends. I'm doing Rock of Ages one day, making out with Russell Brand. Soon after that, I'm advocating with Jesse Tyler Ferguson and Cynthia Nixon for marriage equality. I'm officiating at a gay friend's wedding. I'm not a homophobic person at all. But this is how the world now sees me. I probably have to move out of New York. I just can't live in New York anymore. Everything I hated about L.A. I'm beginning to crave. L.A. is a place where you live behind a gate, you get in a car, your interaction with the public is minimal."

He accuses Rachel Maddow of being a "prime mover" to get him fired and write, "I think Rachel Maddow is...a phony who doesn't have the same passion for the truth off-camera that she seems to have on the air."

Alec also refers to CNN's Anderson Cooper as being a member of the "Gay Department of Justice" for lambasting him on air after his alleged homophobic comments.

The 30 Rock actor also writes about LaBeouf whom he famously fought with while rehearsing the Broadway show Orphans. He believes the 27-year-old carries a "jailhouse mentality" wherever he goes and "loves to argue." He explains, "He had that card, that card you get when you make films that make a lot of money that gives you a certain kind of entitlement."