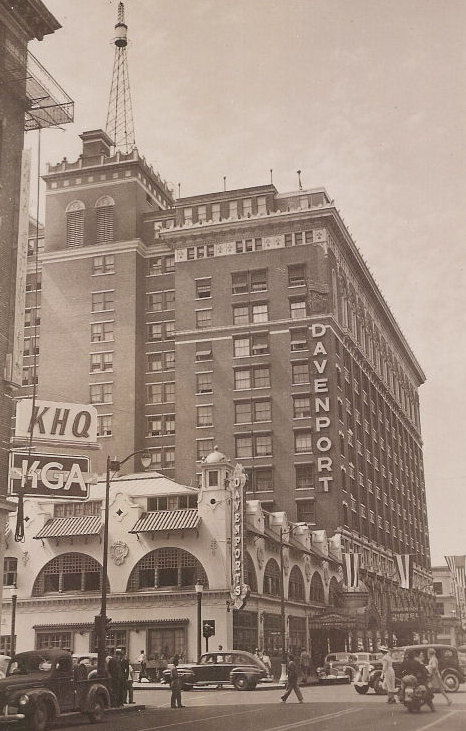 In 1922...KHQ-AM, Spokane, Washington, began broadcasting. Louis Wasmer founded the pioneer radio station KHQ in 1922 in Seattle, as part of a motorcyle shop he owned. He later re-established the station in Spokane in 1925.

The picture to the left is a view of the KHQ's tower on top of the Davenport Building probably from the 1940's based on the age of the automobiles pictured. KHQ was not using the tower at this time. The KHQ and KGA signs are attached to the Radio Central Building which was being used by those station at that time. 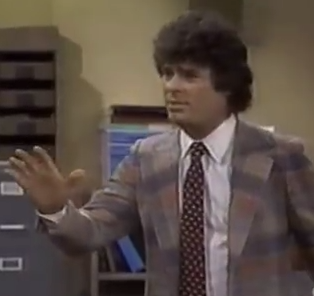 
In 1969...WABC FM starts “Love” format.  The station went on the air on May 4, 1948 under the call sign WJZ-FM  and in March 1953, the station's call letters were changed to WABC-FM following the merger of the American Broadcasting Company with United Paramount Theatres.

As most FM stations did during the medium's formative years, 95.5 FM simulcast the programming of its AM sister station.

In the early 1960s, however, WABC-FM began to program itself separately from WABC (AM). During the 1962–63 New York City newspaper strike, the station carried an news format for 17 hours daily. Two-and-a-half years before WINS launched its own around-the-clock, all-news format in April 1965, it was the first attempt at an all-news format in the New York market.

At the start of 1968, ABC split its radio network into four distinct components, one of which was dedicated to FM radio. The following year, WABC-FM and its sister stations–KABC-FM in Los Angeles; WLS-FM in Chicago; KGO-FM in San Francisco; WXYZ-FM in Detroit; KQV-FM in Pittsburgh; and newly acquired KXYZ-FM in Houston–began carrying an automated, youth-oriented, progressive rock format known as Love.  Click Here for aircheck. Click Here for Part Two.


In 1983...the CBS series M*A*S*H ended after 11 seasons with a special two-and-a-half-hour finale that was watched by an estimated 121.6 million people -- 77 percent of the viewing public.


In 2001...WNSW 1430 AM dropped an adult standards format. Today the station, with the same call letters, airs a Spanish format.


In 2004...longtime Texas radio broadcaster Ken "Hubcap" Carter died at age 60. Carter billed himself as the "semi-legendary almost king of rock 'n' roll".  Carter, who was inducted into the Texas Radio Hall of Fame in 2002, began his career in Lufkin.

He got his nickname early in his career for spinning records — "real records, like spinning hubcaps," Lucia said.


In 2006...CBS Radio sued Howard Stern, his agent, his company, and SIRIUS Satellite Radio for "compensatory and punitive damages for multiple breaches of contract, fraud, unjust enrichment, and misappropriation of CBS Radio's broadcast time".  CBS Radio claimed Stern had violated his contract by improperly using his airtime on CBS stations to promote his January 2006 move to Sirius.

Stern "misappropriated millions of dollars' worth of CBS Radio air time for his own financial benefit," the 43-page lawsuit charged.