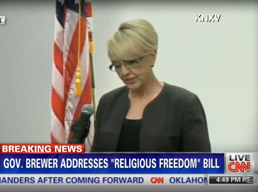 Rush Limbaugh on Thursday blasted Arizona Gov. Jan Brewer’s veto of SB 1062, saying the decision has likely left the Founding Fathers “spinning in their graves” — although not all the conservative radio talkers agreed with his position, according to MacKenzie Weinger at Politico.

Limbaugh told listeners that with the veto, “Democrats and their media allies are cheering; even some Republicans are praising Arizona.” But SB 1062 was “mischaracterized from the get-go” as anti-gay when it was actually “pro-religious freedom,” Limbaugh said.

Tucson’s Jon Justice, on KTQH 104.1 FM the Truth, said he was “certainly glad that Gov. Jan Brewer did what she did. It was the right move. And I’m really glad she didn’t wait any longer.”

The conservative host of “The Jon Justice Show” said his listeners “were glad that it was over. That was kind of universal.” The entire fight over SB 1062 was a “bizarro battle of the misinformed,” he said.

And Salem's nationally syndicated radio host Mike Gallagher wrote in an email that he’s “focused on trying to get Republicans elected in November. I’m hoping the GOP will now focus on Obamacare. Frankly, I don’t like any issue getting in the way of that.”

Fox News’ Geraldo Rivera, on WABC 770 AM, also weighed in, tweeting, “Bravo Gov Brewer in Arizona-Not only was veto of vile law the right thing-it also drags the GOP from wrong side of history.”

And conservative radio host Dana Loesch, who also hosts a show on TheBlaze and KFTK 97.1 FM in St. Louis, tweeted after Brewer’s announcement Wednesday night that “the way that the media has covered the AZ story is predictably pitiful, but I’m shocked at some conservatives buying it. Whatta shame.”