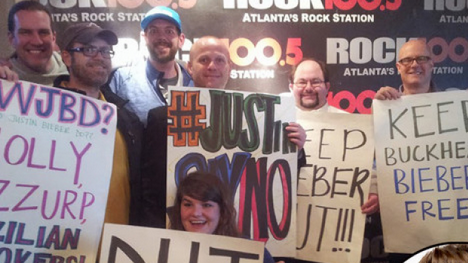 It had all the elements of an irresistible story, but ultimately it was too good to be true, reports CNN.

A popular celebrity. Breathless media chronicling his every move. And an affluent Atlanta neighborhood up in arms over a possible new neighbor.

Amid rumors that pop star Justin Bieber was considering a move to Atlanta, the Regular Guys, a morning show on Atlanta radio station WNNX Rock 100.5, put together a fake neighborhood group and pulled the wool over the eyes of the world's news organizations.

They convinced the media that the newly formed Buckhead Neighborhood Coalition wanted no part of Bieber setting up his new digs in the midst of their old-money mansions.

"The Buckhead Neighborhood Coalition is an organization put together by 'the Regular Guys Show,' " host Larry Wachs admitted Monday after the show's cast completed its "protest" in front of an on-the-market mansion.

The "protesters" were actually just six interns at The Regular Guys show who dressed "rich" à la the stereotypical Buckhead Betty in "just in a nice shirt with a high-waisted belt," and standard Buckhead man in a suit, although "they looked more like bad attorneys."

And these interns, pretending to be part of a made-up Buckhead Neighborhood Coalition, carried signs that read, "She doesn't want the 'B'," "No Justins, no peace," "Keep Bieber Out," "No Bieber in Buckhead" and less family-friendly, anti-Bieber turns of phrase.

"We just sent tweets out, and that's it—just social media," explained Rickman.  "We did not send press releases or anything like that to our local affiliates. We're really not trying to, you know, burn everybody—we're just doing something fun."

That said, The Regular Guys show team was "floored by the response" their protest prank drew internationally from outlets including CNN, BBC News and TMZ. "We just did it as a fun thing," said Rickman. "I mean it spun completely [out of control]…We're blown away. It's a home run when you're a morning radio show."

@belowATL , we reserve the right to a 24-hour gloating period.
— The Regular Guys Sho (@TheRegularGuys) February 25, 2014


Fortunately, though, the real residents of Buckhead have yet to take a public stance against the possibility of having the Biebs as their next door neighbor.