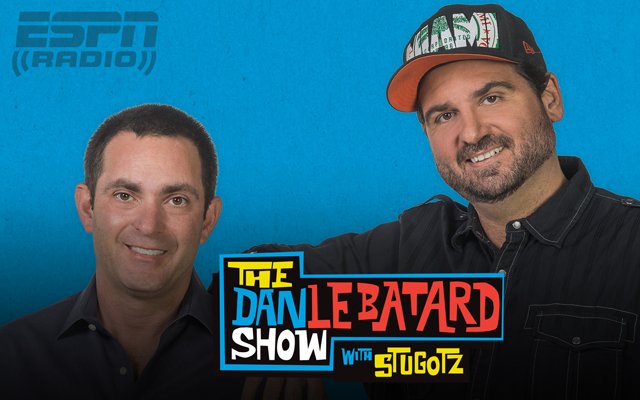 ESPN and Dan Le Batard have announced that Le Batard will be leaving ESPN early next year to pursue a new opportunity. The ESPN Radio finale of The Dan Le Batard Show with Stugotz will be Jan. 4, the same day Le Batard will host his last episode of Highly Questionable – which will remain on ESPN.

“It was mutually agreed that it was best for both sides to move on to new opportunities and we worked together closely to make that possible,” said Norby Williamson, ESPN executive vice president and executive editor. “We thank Dan for his many years and contributions to ESPN and wish him all the best going forward.”

Le Batard said, “Gracias to ESPN for unleashing Papi and Stugotz upon an unsuspecting America, and for lending its substantive credibility to our careening clown car. Can't believe Stugotz finally achieved his dream of becoming a high-priced free agent. I'm forever indebted to Erik Rydholm, Matt Kelliher and their vibrant team for providing a creative oasis across a decade, and for expanding the Le Batard family to include so many brilliant colleagues who have become forever friends, bonded eternally by laughter and love. Want to also extend my gratitude to Chuck Salituro, Jimmy Pitaro, Traug Keller, Marcia Keegan, Connor Schell, Juan Diaz, Mike Foss, Amanda Gifford, Liam Chapman, Megan Judge, Elizabeth Fierman, the Hialeah-soaked crew at Imagina ...and when did this become a droning acceptance speech instead of a quick goodbye? In short, thank you, Disney and ESPN, for a quarter century of absurd blessings. To our loyal army of concerned fans, and to everyone who walked along and played an instrument in our Marching Band to Nowhere, know that it is a very exciting time for us, not a sad one. And that you'll be hearing our laughter again soon enough.” 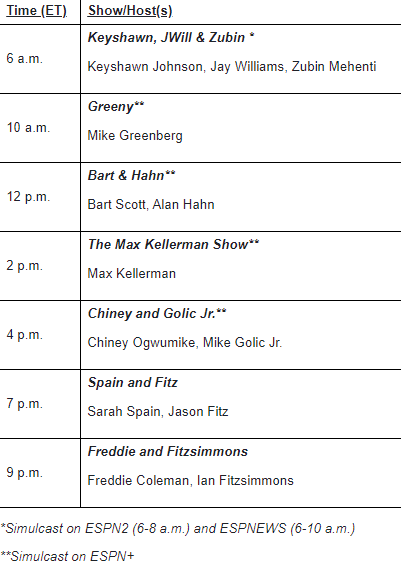 On Jan. 5, Greeny, with Mike Greenberg, will move to the 10 a.m. – 12 p.m. ET timeslot, followed by Bart & Hahn which will join the national ESPN Radio lineup from 12 – 2 p.m. every weekday. The show, which features Bart Scott and Alan Hahn, has been a fan favorite on 98.7FM ESPN New York since its debut in January. Both Greeny and Bart & Hahn will be simulcast on ESPN+.

ESPN’s weekday commentary show Highly Questionable, will continue to be a key part of the network’s television lineup featuring a contributing team, including Elle Duncan, Domonique Foxworth, Israel Gutierrez, Bomani Jones, Mina Kimes, Katie Nolan, Sarah Spain, Pablo Torre and Clinton Yates. The show will continue to be produced remotely due to COVID-19, but will be based long term at ESPN’s New York Seaport Studios. Le Batard and his father, Gonzalo "Papi" Le Batard, will host their final episode of Highly Questionable on Jan. 4.

“Greeny’s move will provide fans with a seamless transition from Get Up to Mike’s more in-depth takes on radio. Bart & Hahn has a great following in New York and we’re excited to bring that show to a national audience on a regular basis,” said David Roberts, ESPN senior vice president, production. “Highly Questionable will also continue to build on its success, engaging with fans every weekday afternoon, led by a contributing team of signature personalities.”
Posted 10:40:00 AM