The AM Rundown: Dire COVID Warning In Leaked Report 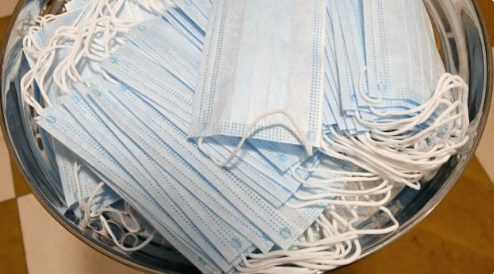 Nearly every square mile of the United States is in the red danger zone for coronavirus, and the threat to the health of all Americans "is at an historic high," according to a report sent by the White House coronavirus task force to the states. The report, which was leaked to the media, warns that a surge in infections will inevitably follow the Thanksgiving weekend and threatens to overwhelm the medical system. Yesterday, for the fourth day in a row, hospitalizations for COVID-19 reached a record high. A total 98,691 were hospitalized and 2,597 died.
Dr. Robert Redfield, head of the Centers for Disease Control, issued a stark warning that total deaths from Covid-19 could reach "close to 450,000" by February unless most Americans follow basic precautions like wearing masks. Nearly 275,000 have died to date.
On a more positive note, the CDC is expected to shorten its guidance for the quarantine period that should follow exposure to COVID-19. The recommended period to stay home will be shortened to seven to 10 days from the previous two weeks.

CNN Refuses to Show Any Excerpts from Trump's 46-Minute, Lie-Filled Rant Against His Election Loss: 'Essentially a Propaganda Video' https://t.co/JFPxd7cx5T


➤PRESIDENT TRUMP CONTINUES TO DISPUTE ELECTION RESULTS: President Donald Trump has posted a 46-minute video on Facebook and Twitter in which he demanded that the results of the 2020 election be overturned immediately. He asserted that the results were fraudulent, and claimed that there were instances of dead people voting, mysterious machine malfunctions and rampant corruption in big city polling places. The president said our election system is "under coordinated assault and siege."

Trump to travel to Georgia on Saturday to rally for Perdue and Loeffler https://t.co/KKLOkkCIP5

➤TRUMP TARGETS SOCIAL MEDIA: President Donald Trump has threatened to veto an important defense spending bill unless Congress adds something entirely unrelated to it: A measure to undo the protection from lawsuits that social media companies enjoy. That is, sites like Facebook and Twitter cannot now be held legally responsible for the content of the posts on their sites. The president tweeted about it this week, saying that the 1996 Communications Decency Act is "a serious threat to our National Security & Election integrity." He and other conservatives also believe that the social media companies are tougher on conservatives than on liberals. Twitter has been regularly fact-checking the president's claims on election fraud. 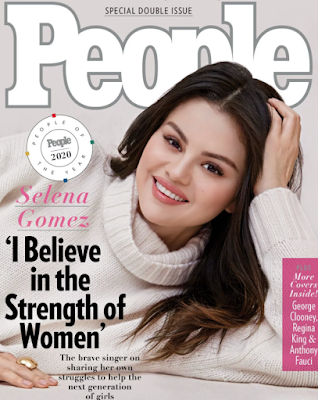 ➤'PEOPLE' UNVEILS ITS PEOPLE OF THE YEAR: People Magazine revealed the four individuals it has crowned People of the Year, celebrating their talent and their determination to be forces for good. George Clooney, Selena Gomez, Regina King and Dr. Anthony Fauci were recognized. Each person landed their own cover.

Obama criticizes "defund the police" messaging: "You lost a big audience the minute you say it" https://t.co/VYYiHxJZKN

'It's Not A Slogan. It's A Mandate' Progressives Push Back On Obama, Defend 'Defund The Police' https://t.co/lDZnb9o4Yq pic.twitter.com/R3ylUPAeDk

🐷PIGS DON'T FLY: The Department of Transportation has tightened rules on the types of animals that can fly with their people to provide "emotional support." The new rule allows only dogs to fly along, and only those that have been trained to do work or perform tasks for people with disabilities. The airlines have been battling with their customers over this for years. American Airlines has already instituted a policy banning amphibians, ferrets, goats, hedgehogs, spiders, sugar gliders, waterfowl and animals with tusks, horns or hooves. 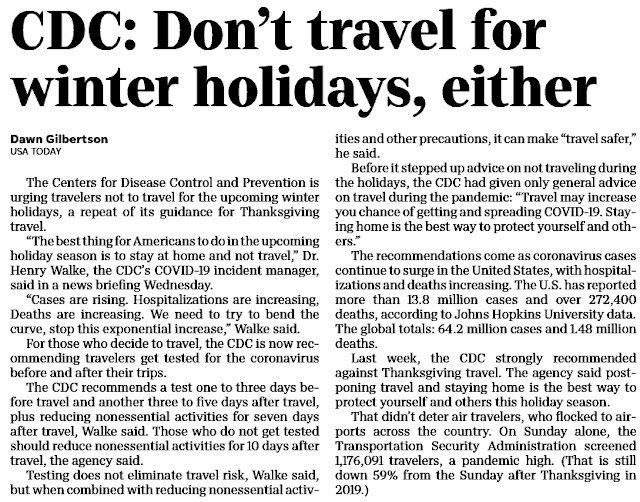 ➤CHICAGO COUPLE USES WEDDING DEPOSIT TO FEED PEOPLE: A Chicago couple used the money that had saved up for a catered wedding reception to feed the needy on Thanksgiving. After cancelling their original plans because of Covid-19, Emily Bugg and Billy Lewis married on October 1st at City Hall in Chicago. The newlyweds then used their $5,000 catering deposit to provide 200 Thanksgiving dinners for clients of Thresholds, a nonprofit mental health provider for people with mental illnesses and substance abuse issues. The dinners catered by Big Delicious Planet included turkey and all the fixings.
➤LADY GAGA ‘CHROMATICA’ OREOS ARE COMING IN 2021: Lady Gaga has teamed up with Oreo to create Chromatica Oreo cookies. The cookies are inspired by the pop star’s sixth studio album, Chromatica, and come in hot pink packaging. The cookies have pink-colored Oreo cookies and are filled with a green-colored cream. However, the cookies will taste like the classic Golden Oreo. They’ll be available wherever Oreos are sold for a limited time beginning in January 2021.

➤PRINGLES IS CHANGING UP ITS CANS AND MASCOT FOR THE FIRST TIME IN 20 YEARS: Pringles recently announced that its cans would be getting a new look for the first time in 20 years. The brand says the new cans have a “new look that features bold hues and a clean design, highlighting the crisps’ inventive flavors and unique, stackable shape.” The brand’s mascot, the mustached Mr. P, also got a new, simplistic design.


🏀SWEET DEAL FOR LeBRON JAMES: LeBron James has signed a deal to stay with the Los Angeles Lakers for two more years for $85 million a year. That's a bit of a raise, since he's being paid $39.2 million for the current season. Speculation is rife that James is eager to stay long enough to play with or against his son, Bronny James, who is currently a star high school player.

🏀NBA OPENING NIGHTS REVEALED: The first NBA games of the season have been scheduled for December 22nd. The Golden State Warriors will meet the Brooklyn Nets at 7 PM ET, followed by the Los Angeles Lakers and the Clippers at 10 PM ET. Then on December 23rd, the Milwaukee Bucks will play the Boston Celtics at 7:30 PM ET and the Dallas Mavericks will play the Phoenix Suns at 10:30 PM ET.
The NBA's traditional holiday package for this year includes five games on December 25th: the New Orleans Pelicans vs. the Miami Heat, the Golden State Warriors vs. the Milwaukee Bucks, the Brooklyn Nets vs. the Boston Celtics, the Dallas Mavericks vs. the Los Angeles Lakers, and the L.A. Clippers vs. the Denver Nuggets.

🏀WESTBROOK IS A WIZARD: The Houston Rockets are sending Russell Westbrook to the Washington Wizards in exchange for John Wall and a future first-round draft pick. Westbrook had reportedly wanted to leave Houston.

🏈BUD DUPREE INJURED: Pittsburgh Steelers linebacker Bud Dupree may have suffered a torn ACL during yesterday's win over the Baltimore Ravens, according to the NFL Network. Coach Mike Tomlin said he'll have an update after Dupree undergoes further testing today.

🏈MEDAL OF FREEDOM FOR LOU HOLTZ: Lou Holtz, the former Notre Dame football coach and a prominent supporter of President Trump, will receive the Presidential Medal of Freedom, the White House announced yesterday. Holtz, now 83, was a college football head coach for 33 seasons, including 11 at Notre Dame, from 1986 through 1996.
Posted 4:28:00 AM