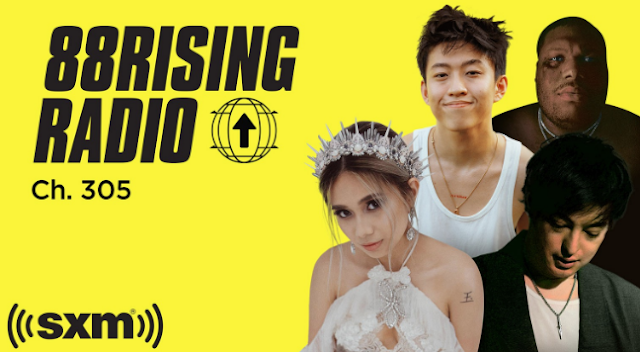 SiriusXM and 88rising, the pioneering Asian-focused music and media company, announced today the launch of 88rising Radio, the first all-Asian, multi-genre music radio channel available across the U.S. The channel will debut tomorrow, December 3 at 12 p.m. ET on SiriusXM's channel 305.

SiriusXM collaborated on the creation of the channel with 88rising, the Los Angeles-based artist collective and media platform, which represents the most cutting-edge artists from Asia, and bridges Eastern and Western youth culture. 88rising, founded by Sean Miyashiro, will develop, curate and present the 24/7 channel. Pandora will launch a complementary 88rising Radio station in January which will include select tracks and exclusive artist audio messages from the SiriusXM channel.

88rising Radio will broadcast an array of music rarely heard on American radio, from the biggest pop songs topping the charts across Asia, to current emerging discoveries, and feature artists from South Korea, China, Japan, the Philippines, Indonesia, Vietnam, Thailand and more. Artists such as BTS, Joji, BLACKPINK, TWICE, Rich Brian, Peggy Gou, Jackson Wang, beabadoobee, Iñigo Pascual, NIKI and many more will be included. When social distancing is no longer required, the channel will also provide a unique platform for touring artists to visit, conduct interviews and interact with listeners, and perform live-on-air at the SiriusXM studios in Los Angeles and New York.

The groundbreaking, first-of-its-kind commercial-free music channel will debut with an all-star 24-hour takeover by acclaimed and closely followed Asian and Asian-American artists. Beginning at 3 p.m. ET, on December 3, 88rising artists and Asian talent from around the world will take over the channel, guest DJing the songs that define them, alongside some of the hottest Asian music acts and their own live performances.  Participating artists will include Yuna, Dumbfoundead, beabadoobee, Phum Viphurit, Japanese Breakfast, Keshi and more.

SiriusXM subscribers can listen to 88rising Radio beginning tomorrow on channel 305 in vehicles and via SiriusXM online or on the SiriusXM app on a wide variety of connected devices, including smart TVs, devices with Amazon Alexa or the Google Assistant, Apple TV, PlayStation, Roku, Sonos speakers and more.