“Not being under the gun every week with how much content I have to generate for radio is something I’m so relieved not to do anymore,” said Howard, who has been on the radio for about 33 years, in an exclusive interview with The Atlanta Journal-Constitution. “I’m at a point in my life I don’t need the money.”

Howard, now 65, is known for his frugality and his finances are just fine, he said. He decided he would stop doing radio when it stopped being fun, and while he enjoyed being on the air, all the work surrounding the show was getting to be too much.

“The Clark Howard Show” is syndicated on about 250 stations nationwide with Westwood One, home to Mark Levin, Michael Savage and Ben Shapiro, among others. The show is heard locally from 10 p.m. to midnight weekdays on WSB, which is at 750AM and 95.5.FM as well as online at wsbradio.com. 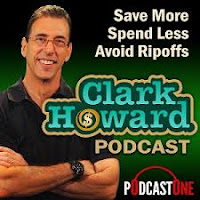 Howard will continue to do daily morning and afternoon commentaries on WSB Radio. Drew Andersson, WSB radio program director, said the station does not know yet what show will replace Howard at the 10 p.m. slot but he’s thrilled to still have Howard contribute daily.

Howard said his websites, Clark.com and ClarkDeals.com, now generate far more revenue than his radio show does. He has 18 full-time employees in Atlanta and many others who work remotely nationwide.

He said the pandemic hurt radio across the board and impacted his show as well. Revenues sharply fell in the spring and have since climbed to about 85 percent of what they were before March, he said.

Howard started his radio career more or less by accident. He had finished a successful run owning a travel agency and was a millionaire by age 33. He decided to provide travel advice on the then-popular news/talk radio station WGST-AM and was so popular, they gave him a show. In 1991, WSB hired him away, and he has been with them ever since. He has also been contributing columns to the AJC for three decades.