The turnout for the visiting Football Team’s 41-16 win over the Cowboys was down 7% compared to last year’s Buffalo-Dallas game on CBS (32.6 million viewers) and trailed Fox’s coverage of the 2018 Tryptophan Bowl, which also featured Washington and Dallas, by fewer than 150,000 total viewers. Thursday’s game ranks 17th on the list of the most-watched Thanksgiving Day NFL broadcasts of the modern Nielsen era.

Fox now accounts for six of the season’s 10 most-watched NFL games, with CBS laying claim to the other four. Thus far in the 2020 campaign, 15 of the 20 highest-rated games have aired outside of primetime. 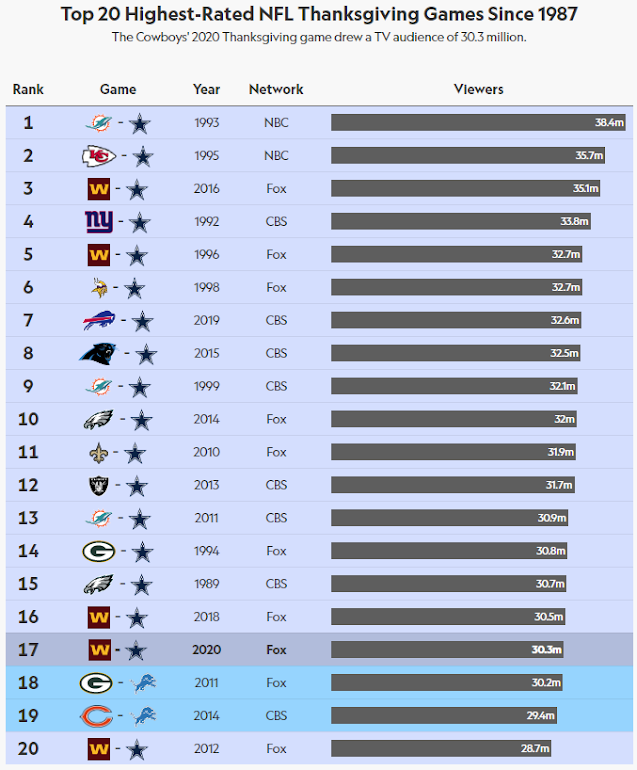 As much as streaming represents the future of video consumption and the [eventual] demise of the linear TV networks, Thursday’s digital deliveries suggest that Fox can rest easy for the near term. The average-minute audience for the Dallas game worked out to be 562,623 streamers, and while that is hardly an inconsiderable figure, it also is merely 1.85% the size of the game’s TV deliveries.

Earlier in the afternoon, CBS’s presentation of the Texans-Lions meetup averaged 23.4 million viewers, down 14% versus Fox’s analogous Bears-Lions broadcast in 2019 (27.1 million) and off 12% compared to CBS’s own Chicago-Detroit game from the previous year (26.5 million). Houston’s 41-25 victory currently ranks as the fourth most-watched NFL broadcast of the 2020 season.