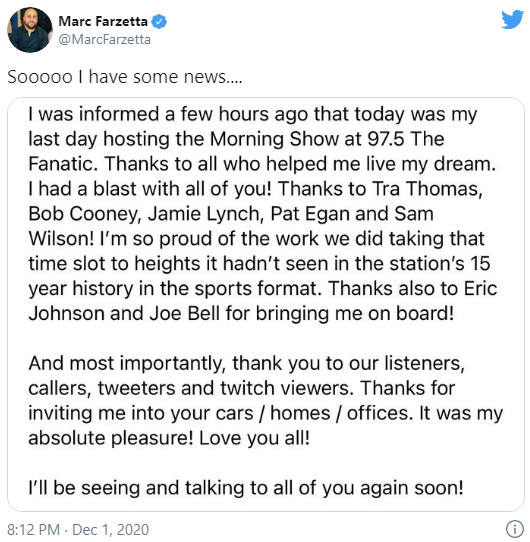 Marc Farzetta will no longer be hosting Beasley Media's WPEN 97.5 The Fanatic’s morning show.Farzetta announced on social media Monday night he had been informed by station management a few hours earlier that Monday would be his last day hosting the morning show he launched in October 2018.

“I’m so proud of the work we did taking that time slot to heights it hadn’t seen in the station’s 15 year history in the sports format,” Farzetta said in a statement.

Farzetta’s former cohost, ex-Eagles offensive lineman William “Tra” Thomas, was laid off back in March as part of cutbacks due to the impact of the coronavirus pandemic, which has severely hurt media companies dependent on advertising revenue.

It’s not clear if any other hosts or employees at The Fanatic were also let go Tuesday. Farzetta had been hosting the show alongside former Daily News reporter Bob Cooney and producer Jamie Lynch.

Farzetta and his cohosts were able to grow the show’s ratings over predecessor Anthony Gargano, but never really presented a serious challenge to Angelo Cataldi and 94.1 WIP’s popular morning show. In fact, Cataldi cited Farzetta’s departure from WIP after 13 years as a reason he re-signed with the station in 2019.

Farzetta joined the station in August 2018 from rival Sportsradio 94 WIP, where he was viewed as a potential successor for morning show ratings kingpin Angelo Cataldi. Instead, he chose to take on his mentor at The Fanatic. The morning program, which runs from 6 a.m. to 10 a.m., was originally known as “Farzetta and Tra In the Morning.” Farzetta’s co-host was former Eagles All-Pro offensive tackle Tra Thomas.

Thomas was let go earlier this year as part of Covid-19-related cutbacks from parent company Beasley Media Group (NASDAQ: BBGI). Farzetta soldiered on with colleagues Jamie Lynch and Bob Cooney. While there was some improvement from predecessor Anthony Gargano, he failed to put a dent in Cataldi’s ratings armor.

Joe Bell, market manager for The Fanatic’s parent company, Beasley Media Group (NASDAQ: BBGI), could not be immediately reached by The Philly Business Journal for comment.

While WIP was fourth in the overall Philadelphia market ratings for the November book, The Fanatic did not crack the top 20. Chuck Damico was brought in this summer to serve as the station's program director, replacing Eric Johnson.

One rumored replacement for Farzetta is Jon Kincade, who is another Cataldi mentee. Kincade worked at WIP from 1992 to 1994 before relocating to Atlanta where his career took off. He hosted shows for ESPN Radio and CBS Sports Radio but spent the past 20 years at WCNN 680 The Fan, much of which he co-hosted the Buck & Kincade show along with former University of Georgia quarterback Buck Belue. But he was laid off in September by parent company Dickey Broadcasting as part of Covid-19 cuts.