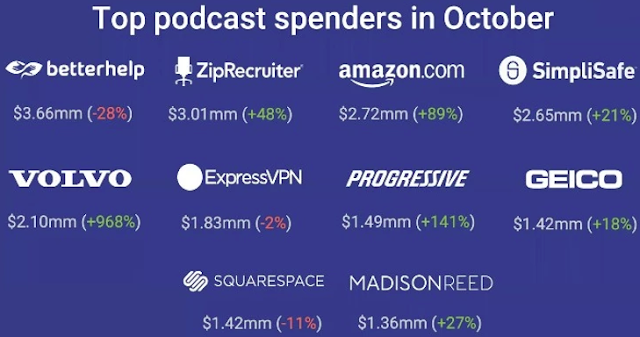 The list of the ten biggest podcast advertisers during October is a sign that the industry continues to shake-off any impact of COVID-19. “This is a back-to-normal. There are a lot of advertisers here that were big advertisers in 2019, and pre-pandemic,” Magellan CEO Cameron Hendrix said during a company webinar last week, reviewing the top ten monthly spenders.

Magellan’s data shows the online mental health service provider BetterHelp and the recruitment company ZipRecruiter were the top two spenders during October, followed by retailer Amazon which nearly doubled its outlay compared to a month earlier. “ZipRecruiter had pulled back spending during the pandemic and have certainly come back pretty strong,” said Hendrix. Seven of the top ten had month-to-month increases with Volvo the biggest mover as it promoted the release of its XC90 and XC90 Hybrid models with a podcast ad budget that was up a whopping 968%. “These brands picking up in October are very much a return back to some of the bigger spenders that we saw last year,” said Hendrix.

Among the various advertising categories, Magellan says financial services was one of October’s standouts with five brands significantly increasing their ad spending – including Chase, Virginia529, Ally, MasterCard, and LoanDepot. Overall, the entire category jumped about 27% between September and October. 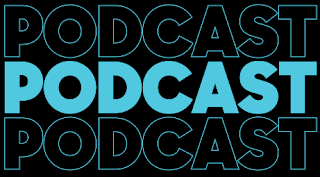 “In the financial services jump that we’re seeing in this month, we’re really not seeing a real similarity in the message these advertisers are bringing to market,” said Hendrix. LoanDepot promoted options for loans and refinancing, Virginia529 offered information about saving for children’s future college tuition bills, while Chase promoted a new credit card.

Hendrix noted that although Chase was not new to podcast advertising, Magellan estimates October was the bank’s biggest month ever for podcast ad spending. “Each of these brands had different reasons for getting into the market, but nonetheless October was the month in which all of them really jumped in and increased their spending quite significantly,” he said.

There were also some new advertisers that came roaring into podcasting. Magellan data shows the men’s watch brand Christopher Ward spent about $100,000 on podcast ads in October. Hendrix said that “big splash” followed a much smaller test of the medium during September. And while 72 jewelry brands bought podcasts ads during the month, Christopher Ward accounted for 21% of the category’s overall podcast ad spending during October.

The year-end gift-giving season typically sees an uptick in jewelry ad spending. Last year jewelry companies increased their podcast ad spending by 50% month-over-month during the fourth quarter. “It seems likely they may be increasing their spending again in November and December as we head into the holiday season,” said Hendrix.