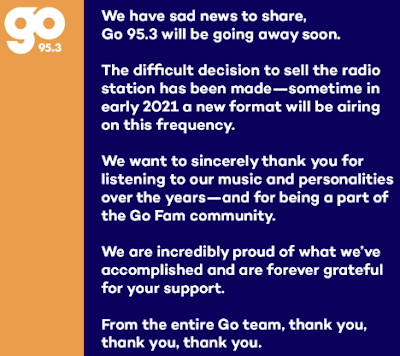 The Twin Cities’ most prominent hip-hop radio station and its sister pop-rock outlet will soon go off the air, reports The Star-Tribune.

Pohlad-owned stations KZGO Go 95.3 and KQGO Go 96.3 FM are being sold and will change to new formats to Christian music. The new buyer of the stations, Educational Media Foundation (EMF), is a Rocklin, Calif.-based nonprofit that runs the contemporary Christian music radio networks K-LOVE and Air1.

“This has been the most incredible experience of my life,” the station’s flagship DJ Peter Parker (née Peter Mazalewski) said when reached for comment Tuesday night.

Go executives did not yet respond to requests for comment, nor did representatives from the stations’ new ownership. The frequencies used to operate as Christian stations before the Pohlads took them over.

The demise of both Go stations can be attributed to the broader decline of FM radio on the whole among younger listeners, who now often turn to YouTube, SoundCloud, Spotify and other streaming services to hear new music.In a press release distributed at 7pm Eastern on Tuesday, Ben Hawn, Chief of Staff for Pohlad Companies, said, “We have decided to exit the radio business. We are deeply grateful to the talented team at Go Radio and proud of their engagement within our community. We also sincerely appreciate the loyal support of our audiences over the years.”