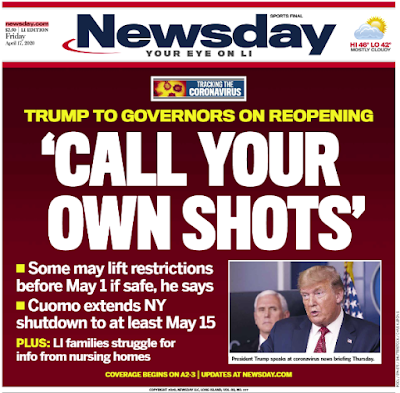 President Trump on Thursday gave governors three-phase, non-mandatory guidelines to reopening the economy amid the coronavirus crisis in places that have strong testing and are seeing a decrease in cases, saying, "This is a gradual process."

The guidelines acknowledge the same approach won't work everywhere, with tougher restrictions needing to remain in areas that have been harder hit. They also largely track plans governors have already been working on. 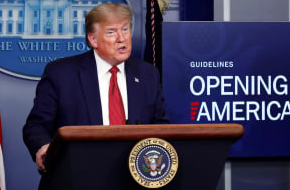 In the first phase, it recommends strict social distancing for everyone in public, with gatherings of larger than 10 people avoided and nonessential travel discouraged. In the second phase, maximizing social distancing is encouraged and gatherings limited to 50 people, with travel resuming. The third phase would be a return to normalcy, with a focus on identifying and isolating new infections.

Checkpoints for new cases, testing and surveillance over 14 days are recommended before moving from one phase to the next. After initially saying earlier this week that he has ultimate authority to decide when the country can reopen, Trump reversed his stance, telling the governors on a conference call yesterday, "You’re going to call your own shots. We’re going to be standing alongside of you."

Coronavirus patients with severe illness being treated with the antiviral drug remdesivir in a Chicago hospital are seeing rapid recovery from fever and respiratory symptoms, with nearly all of them discharged in less than a week, STAT News reported yesterday. Other trials of the drug are being run at other institutions, and if it's found to be safe and effective, remdesivir could become the first approved treatment against the disease. 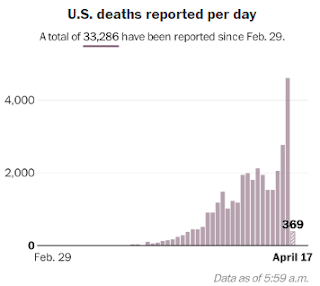 Daily deaths in New York, the epicenter fo the U.S. outbreak, fell to 606 on Wednesday, the lowest in more than a week, but Governor Andrew Cuomo said, "That is still continuing at a really, really tragic rate." Cuomo also said the number of people hospitalized is at its lowest since April 6th, and intensive care admissions and intubations were also down. In the U.S. overall, the death toll is around 31,000 with 650,000 confirmed infections, and worldwide, 140,000 have been killed and 2.1 million infected, according to a tally by Johns Hopkins University. 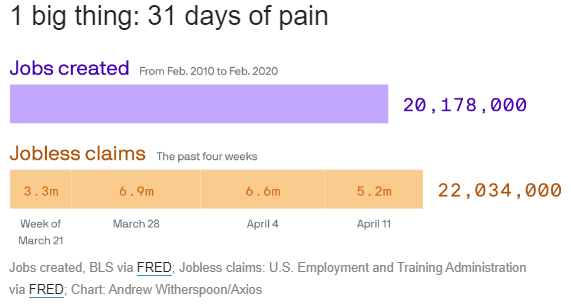 ➤ANOTHER 5.2 MILLION FILE FOR UNEMPLOYMENT, SMALL BIZ PROGRAM ALREADY OUT OF MONEY: The federal government reported Thursday  that another 5.2 million people applied for unemployment benefits last week, bringing the four-week total to 22 million, or about one in seven U.S. workers, amid the coronavirus shutdown. That's the worst stretch on record, and economists said the unemployment rate could reach 20 percent in April, the highest since the Great Depression. Meanwhile, the Paycheck Protection Program, passed by Congress last month as part of its coronavirus rescue bill to help small businesses make payroll, has already reached its $349 billion limit, after being overwhelmed by businesses applying for loans. President Trump has made an emergency request to add another $250 billion, but congressional lawmakers are trying to break a stalemate over it, with Democrats wanting it to include money for hospitals being swamped by coronavirus cases, and for states and local government struggling economically because of the crisis.

➤NAVY CAPTAIN FIRED OVER CORONAVIRUS WARNING MAY BE REINSTATED: The New York Times reported that Admiral Michael Gilday is reviewing the results of a preliminary investigation into Captain Brett Crozier's removal, and while no decision has been made, he's indicated Crozier could be reinstated. Crozier was removed by then-acting Navy Secretary Thomas Modly, who resigned days later after blasting Crozier in address to the ship's crew. After leaving the ship, Crozier tested positive for the coronavirus, and a total of 615 crew members of the Roosevelt have also tested positive. One crewmember, 41-year-old Chief Petty Officer Charles Robert Thacker Jr., has died.

➤PGA TOUR PLANS TO RESUME IN JUNE, WITH NO FANS: President Trump said Thursday that U.S. sports leagues will likely resume in a “made for television” format in the coming weeks as part of efforts to restart the economy amid the coronavirus pandemic. Trump said the guidance was based on discussions with top sports executives and commissioners named to an advisory group in the administration’s “Open Our Country” task force. The sports council had its first conference call Wednesday and discussed preliminary plans to resume activities following an industry-wide shut down in mid-March.

The PGA Tour on Thursday revealed its plans to resume its season that's been suspended because of the coronavirus in mid-June, but without any fans at the golf tournaments for at least one month. The Tour is looking to begin again with the Charles Schwab Challenge at Colonial in Fort Worth, Texas, from June 11th to 14th. If they get the go-ahead from government and health officials, there would then be an official tournament every week. Tour Commissioner Jay Monahan said. "[W]e will resume competition only when . . . it is considered safe to do so under the guidance of the leading public health authorities."
Posted 4:25:00 AM