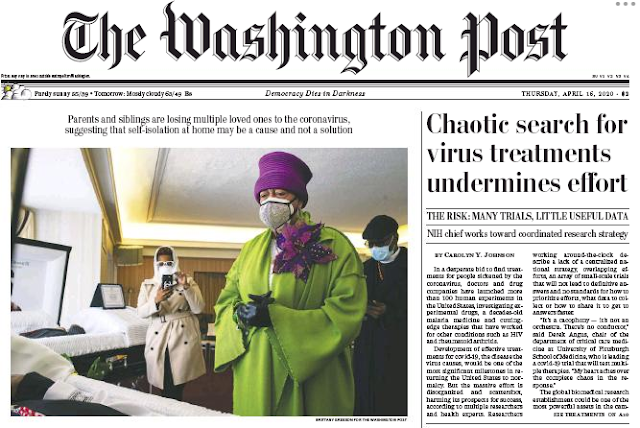 The U.S. had its highest number of deaths in one day from the coronavirus, with Johns Hopkins' tally saying Wednesday (April 15th) that 2,405 died across the country on Tuesday after several days in which the number of deaths had fallen or was nearly flat. The total is now over 28,000 deaths and over 600,000 confirmed infections. However, Dr. Anthony Fauci, the nation's top infectious disease expert, said on NBC's Today show that it's plateauing, saying, "There's no doubt what we've seen over the last several days is a flattening out." According to the Johns Hopkins count, there have been more than 130,000 deaths worldwide and two million confirmed infections.

One-time government stimulus payments began to be deposited in Americans' bank accounts Wednesday, with qualifying adults getting up to $1,200 each and married couples up to $2,400, and $500 per child, as many Americans have lost their jobs or had their hours or pay cut because of the massive economic fallout from the pandemic. Other people will have paper checks mailed to them, depending on how they filed their tax returns.

Protesters in Michigan who want the state's stay-at-home order lifted mounted a protest in the capital, Lansing, organized by two conservative groups by gridlocking the streets for miles with their cars. Democratic Governor Gretchen Whitmer extended the lockdown order last week through April 30th, and added more restrictions. Michigan has the third-highest number of deaths in the country, and Whitmer defended her actions, saying on CNN, "We have to be really aggressive here in order to save lives." Some protesters got out of their cars and groups gathered on the grounds of the Capitol. Whitmer said, "We'll never know the precise number of Covid-19 cases that come as a result of this gathering, but we know there will be some."

In other developments:
➤GLOBAL ALARM AT TRUMP STOPPING PAYMENTS TO WORLD HEALTH ORGANIZATION: Countries and health experts around the world expressed alarm Wednesday (April 15th) at President Trump saying a day earlier that he was stopping U.S. payments to the World Health Organization, saying it could hurt efforts to fight the pandemic. Trump suspended the funding while a review is conducted of the WHO's initial response to the pandemic after it emerged in China, claiming it didn't give adequate early reports and repeated China's assurances about how the virus is spread. WHO Director-General Tedros Adhanom Ghebreyesus expressed "regret" about Trump's actions, and while not addressing Trump's complaints directly, said it would review its decisions. He added, "WHO is reviewing the impact on our work of any withdrawal of U.S. funding and will work with our partners to fill any financial gaps we face."

➤FLORIDA INMATE FREED BECAUSE OF CORONAVIRUS ACCUSED OF MURDER NEXT DAY: A 26-year-old Florida inmate who was released from jail due to the coronavirus pandemic has been accused of murdering someone the next day. The Hillsborough County Sheriff's Office says Joseph Edwards Williams was being held on drug charges including possession of heroin when he was released on an emergency order for pre-trial detainees believed not to pose a threat to public safety. He was then allegedly involved in the shooting death of a man the day after he was released. He was arrested and is being held on charges including second-degree murder. Officials said Williams is the only Hillsborough County inmate known to have committed a crime after being freed under the emergency order.
Posted 4:27:00 AM