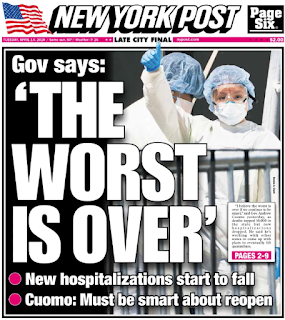 New York, the epicenter of the the coronavirus outbreak in the U.S., has now passed 10,000 deaths, nearly half of the country's death toll of more than 23,000. But Governor Andrew Cuomo pointed Monday to a reduction in the state's daily death toll, although still at what he called a "horrific level," with 671 deaths Sunday, down from 758 on Saturday and the upper 700s for several previous days. He also cited a reduction in net hospitalizations and the number of people on ventilators, saying it appears, quote, "the worst is over . . . if we continue to be smart going forward."

President Trump claimed yesterday on Twitter and at his daily coronavirus briefing that he has the authority to decide how and when to reopen the economy from tough social distancing guidelines. However, both Republican and Democratic governors pushed back, saying they have the primary constitutional authority to ensure public safety in their states, and will decide when it's safe to start trying to reopen. That came as Democratic governors in the Northeast and on the West Coast announced regional pacts to coordinate scaling back social distancing and reopening businesses. The agreements are among the governors of New York, New Jersey, Connecticut, Pennsylvania, Delaware and Rhode Island in the Northeast, and California, Oregon and Washington on the West Cost.

During yesterday's White House briefing, Dr. Anthony Fauci, the nation's top infectious disease specialist, clarified comments he'd made on CNN Sunday. Fauci said he was responding to what he called a "hypothetical question" when he said more could have been done to save American lives from the virus if action had been taken earlier. He said his response, quote, "was taken as a way that maybe somehow something was at fault here." After the Sunday interview, Trump had retweeted a post that referred to Fauci's comments and included the lines, "Time to #FireFauci." That led to concern Trump might remove Fauci, but Trump said Monday at the briefing, "I’m not firing him. I think he’s a wonderful guy."

In other developments:
➤AT LEAST 31 KILLED BY STORMS IN SOUTHEAST: There were at least 31 people killed by storms, including tornadoes, that ripped across the Southeast on Sunday (April 12th) and overnight before moving across the eastern part of the country on Monday. The storms also left nearly 1.3 million homes and businesses without power in a large stretch from Texas to Maine. There were 11 killed in Mississippi, nine in South Carolina, eight in Georgia, and at least three in Tennessee.

➤SANDERS ENDORSES BIDEN: Less than a week after suspending his presidential campaign, Senator Bernie Sanders endorsed former Joe Biden, the presumptive Democratic nominee. Sanders urged his progressive supporters to back Biden, saying in a virtual event with the former vice president, "I am asking all Americans, I’m asking every Democrat, I’m asking every independent, I’m asking a lot of Republicans, to come together in this campaign to support your candidacy, which I endorse." While telling Biden it's, quote, "no great secret out there that you and I have our differences," he said the bigger priority for all Democrats should be preventing President Trump's re-election, saying, "We’ve got to make Trump a one-term president. I will do all that I can to make that happen." The two former rivals announced the formation of six task forces made up of representatives from both campaigns to work on policy agreements on health care, the economy, education, criminal justice, climate change and immigration.

➤TRUMP TO ASK FOR CENSUS DELAY AMID PANDEMIC: President Trump said yesterday (April 13th) that he will ask for a delay of the 2020 Census amid the coronavirus pandemic to ensure it's done "safely and accurately." He said the Census Bureau will ask Congress for a 120-day extension, while adding he doesn't think that's long enough. House Oversight and Reform Committee Chair Democratic Rep. Carolyn Maloney said in response, "The Oversight Committee will carefully examine the Administration's request, but we need more information that the Administration has been unwilling to provide."

➤SURVEY: 41 PERCENT OF AMERICANS HAVE LOST INCOME DUE TO PANDEMIC: A new Monmouth University survey out Monday found that 41 percent of Americans say they've lost income because of the coronavirus pandemic, due to a decrease in work hours or a loss of business. That's up from 35 percent who said so in March. The poll also found 22 percent said they've struggled to pay their bills because of the crisis, with nine percent saying they've been laid off and 18 percent saying someone in their household has been laid off. On related topics, 26 percent said they personally know someone who has gotten the virus, 55 percent said their daily stress level has gone up, and 52 percent haven't been able to find things they need in stores or online.
Posted 4:23:00 AM