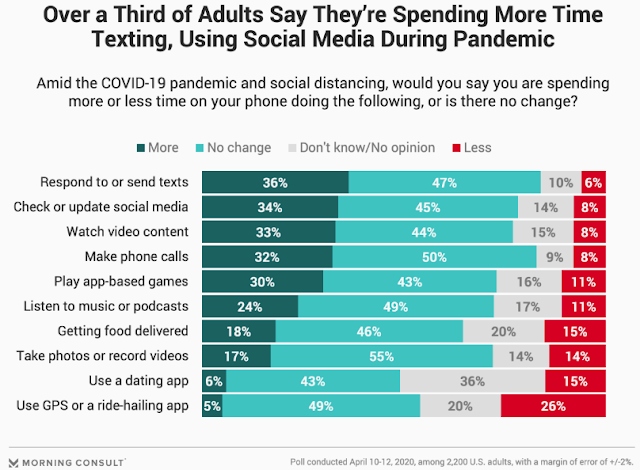 With many Americans stuck at home due to social distancing guidelines, most office meetings, school classes and gym sessions have moved online, making one thing more indispensable than ever: screens.

But according to a new Morning Consult poll, pluralities of Americans say they haven’t changed their smartphone habits much. In the survey of 2,200 U.S. adults, roughly half of respondents said they’ve made no changes in the amount of time they’ve spent doing various phone-related activities — including taking photos and recording videos (55 percent), making phone calls (50 percent) and listening to music or podcasts (49 percent) — during the pandemic.

For respondents who said they were spending more time on their phones in isolation, activities like texting (36 percent), checking and updating their social media accounts (34 percent) and watching television and other video content (33 percent) were the most popular, although those who said they are spending more time on their phones were in the minority.