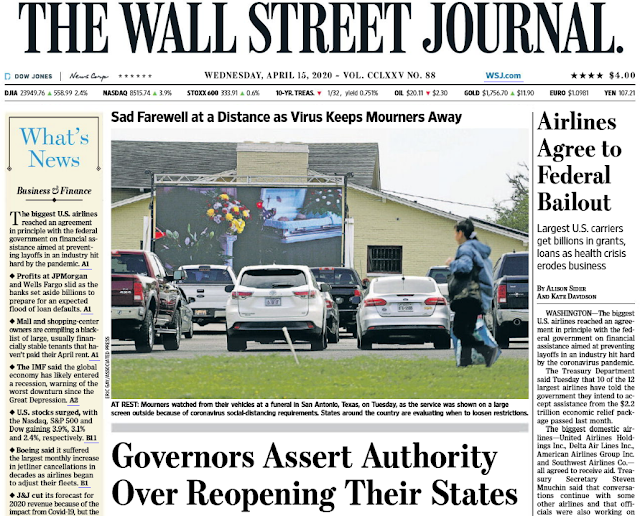 President Trump reversed his position from Monday and earlier in the day yesterday, saying at his daily briefing Tuesday evening, "The governors are responsible" for deciding when to ease social distancing restrictions in their states. Trump on Monday had claimed absolute authority to decide on loosening restrictions, and in response to pushback from governors of both parties who said constitutionally that they did, tweeted earlier yesterday, "A good old fashioned mutiny every now and then is an exciting and invigorating thing to watch, especially when the mutineers need so much from the Captain." Dr. Anthony Fauci, the nation’s top infections diseases expert, told AP earlier yesterday the country is, quote, "not there yet" when it comes to having the testing and contact tracing in place needed to begin reopening the economy.

Trump announced that he's stopping U.S. funding to the World Health Organization while a review is conducted of its initial response to the coronavirus pandemic after it emerged in China, claiming it didn't give adequate early reports, which affected the U.S. response time. He accused the WHO of, quote, "severely mismanaging and covering up the spread of coronavirus." Democratic Senator Chris Murphy, who sits on the Senate Foreign Relations Committee, charged that while the WHO and China made mistakes, the White House is trying, quote, "to find scapegoats for the fatal mistakes that the President made during the early stages of this virus."

The national death toll from the coronavirus in New York City, the epicenter of the nation's outbreak, was increased by an additional 3,700 people Tuesday when the city's health department released revised numbers that included people who weren't tested, but were presumed to have died from the disease. The city's number of dead is now well over 10,000, and the adjustment boosted the national death toll by 17 percent to over 26,000. Connecticut, Delaware, Maryland, and Ohio are other states that have also recently started reporting presumptive deaths from the virus.

➤OBAMA ENDORSES BIDEN: One day after Senator Bernie Sanders, who suspended his presidential campaign last week, endorsed former rival Joe Biden for the Democratic nomination, former President Barack Obama came off the sidelines he stayed on during the Democratic primary and endorsed Biden.

Obama announced the backing of his former vice president in a 12-minute video, referring to the coronavirus pandemic as he said, "Joe has the character and the experience to guide us through one of our darkest times and heal us through a long recovery." Seeking to draw in supporters of Sanders, Obama praised him and backed his call for "structural change," and said that while Democrats might not agree on everything, they must unite to beat the Republicans.

➤STUDY: U.S. MAY HAVE TO KEEP SOME SOCIAL DISTANCING INTO 2022: There may have to be some social distancing measures kept in place into 2022 until a coronavirus vaccine is widely available, according to a study published yesterday. Researchers at Harvard University’s T.H. Chan School of Public Health used computer models to look at how the virus could spread over the next five years. Based on them, the researchers said prolonged or intermittent social distancing may be necessary into 2022 until there's a treatment or vaccine, or the capacity to provide critical care is substantially increased. But the study noted more research is needed to determine if the virus' spread is affected by the seasons and how long immunity lasts.
Posted 5:07:00 AM