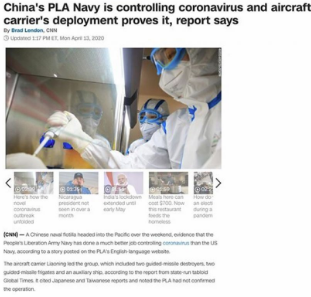 CNN overhauled a story on its website Wednesday after being widely accused of publishing "Chinese propaganda" in a report that originally cited a media outlet controlled by the Chinese government, but the change has been labeled by some as "disingenuous," Fox News reports.

On Monday, CNN.com ran an article about China People's Liberation Army (PLA) supposedly having a foothold in the spread of the coronavirus in a branch of its military. CNN’s original headline was, “China's PLA Navy is controlling coronavirus and aircraft carrier's deployment proves it, report says.”

The story was widely criticized and sparked an outrage on social media with everyone from Press Secretary Kayleigh McEnany and Sen. Josh Hawley to members of the mainstream media condemning the article. 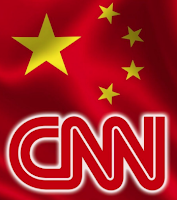 Following the intense backlash, CNN changed the headline and edited the story to make it appear somewhat skeptical of China's claims. The new headline is: “Chinese state media claims country's navy is not affected by coronavirus.”

The original version of the story, written by CNN’s Brad Lendon, praised the Chinese military’s response to coronavirus while noting that multiple U.S. Navy aircraft carriers have reported cases of coronavirus.

"A Chinese naval flotilla headed into the Pacific over the weekend, evidence that the People's Liberation Army Navy has done a much better job controlling coronavirus than the US Navy, according to a story posted on the PLA's English-language website," the original article, which can still be seen via the Internet Archive Wayback Machine, began.

The CNN article’s new lead -- and much of the entire article -- are quite different.

“The coronavirus outbreak, which began in the Chinese city of Wuhan in December last year, has spread to more than 180 countries and sickened close to 2 million people, including more than 80,000 in China. Yet according to the Chinese government, not a single serving member of the country's military has been infected,” the updated version of the article begins.

CNN’s article now includes this editor's note: "This story has been updated to include Pentagon reaction and recent developments in the Western Pacific." But many didn't buy the explanation.
Posted 1:33:00 AM