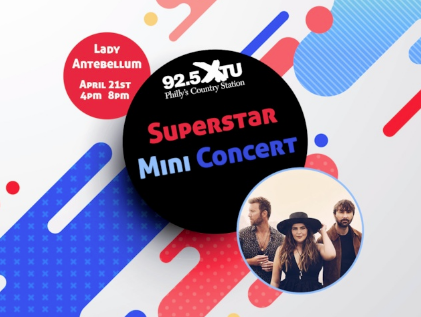 Each mini concert will be exclusively heard on the air on Tuesdays and Fridays at 4pm (local time) with a concert replay at 8pm (same day) on 92.5 XTU.

The series, part of Beasley Media Group’s We Are All in This Together Community of Caring Initiative, will feature country’s hottest artists performing several songs on the air. In addition, they’ll talk about their music, share what they’ve been up to and reflect on how COVID-19 has impacted their lives.

Lucky listeners will also have the opportunity to participate in special private virtual “Meet & Greet” experiences with their favorite artists.

The Superstar Mini Concert Series will be promoted on the air as well as on other platforms.

“We are hoping to fill that void with your favorite artists coming on and giving you a taste of the live concert experience. We’re providing a connection with them for a few songs and hopefully we’ll all be back together soon.”
Posted 3:06:00 AM