Report: Ratings Increase For CNN, But Not Revenue

CNN and other cable news outlets could scarcely imagine that anything could juice viewership like the 2016 U.S. presidential election and its aftermath; but ratings have soared during the pandemic, reaching levels well above those when “Russian interference” and “Mueller report” dominated the news, The Wall Street Journal reports.

CNN has averaged 2.2 million total viewers in prime time through the first week of April, more than double its viewership in the fourth quarter of 2019, and roughly 57% higher than its election-season peak, according to Nielsen data. Fox News is up nearly 50% since the end of last year to over four million viewers, increasing its lead over its two main rivals. MSNBC has seen the smallest lift. The three networks’ websites all saw big audience gains, too.

Cashing in has been difficult for all the channels, however, as the economic fallout of the pandemic causes ad spending to collapse. 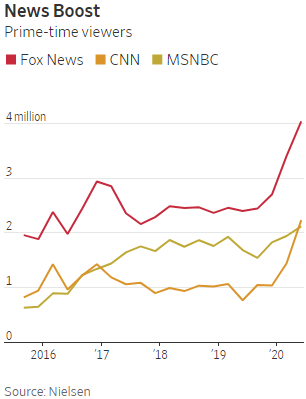 CNN has revised its ad revenue forecasts downward, people familiar with the matter said. Instead of a double-digit percentage increase in revenue this year, the network could be staring at a significant decline, one top media analyst said.

CNN’s digital arm is trying to entice ad buyers by offering to match their spending on public-service messages with free advertising that touts the social good companies are doing, one of the people said.

In some cases, anchors have begun using one-person “flash studios” at the production facility instead of their usual large, glass-walled setup with multiple camera operators, people familiar with the matter said. Crews at the facilities volunteer for their stints, the people said, and no one is being forced to show up.

Despite the precautions, two prominent CNN anchors—Brooke Baldwin and Chris Cuomo—contracted the virus. Mr. Cuomo, perhaps the network’s highest-profile coronavirus chronicler, has documented his status nightly while broadcasting from home. Anderson Cooper, who like Mr. Cuomo is New York-based, did his show at home for a time after a staffer was infected. The company declined to provide a count of confirmed cases among its staff members.

“I don’t think we realized how crazy this would be,” one CNN employee said. “Cuomo’s show is from his basement. Nobody expected that.”

Last year CNN sank to third place in cable-news ratings. But its recent jump has put it within shouting distance of Fox News in the core news demographic of those 25 to 54 years old with an average of about 50,000 viewers separating them in prime time through the first week of April, according to Nielsen data. For the year thus far, Fox has a larger lead.
Posted 1:30:00 AM