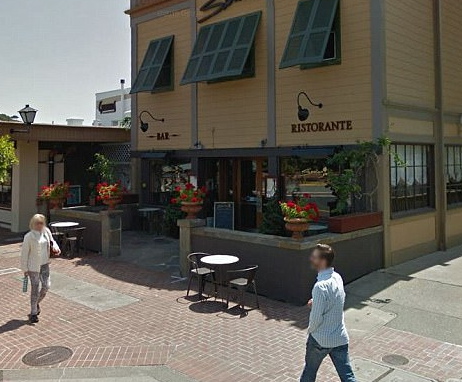 As Savage was heading out the door, the verbal abuse allegedly turned physical when the jeerer knocked the septuagenarian to the ground, according to the talk show host's attorney, Daniel Horowitz.

When another diner tried to step in between the brawlers, he was punched in the face, Horowitz told the Mercury News.

Savage's beloved 12-year-old pooch also got shoved after getting caught in the middle of the scuffle.
The disturbance at the Italian restaurant at a shopping center on Main Street has been confirmed by the Tiburon Police Department.

A report of the incident will be sent to the District Attorney’s Office, which will determine whether or not to file charges in the case.

Horowitz said it’s still not entirely clear what motivated the alleged assault, but his office is looking into whether it was a hate crime or whether it had anything to do his client’s political views and his support of Trump, both frequent subjects of his “Savage Nation” nationally syndicated radio show.

Savage has been described as the “Godfather of Trumpmania” for encouraging his 10 million listeners to vote for the real estate mogul and reality TV star. Savage’s support of Trump made headlines last month when the president said of Savage, after an hourlong dessert meeting at his Mar-a-Lago estate in Palm Beach, Florida: “I wouldn’t be president without this man.”
.
Savage, whose program draws up to 10million listeners per week, claimed that his unnamed assailant knew who he was and had some type of 'beef' with him.