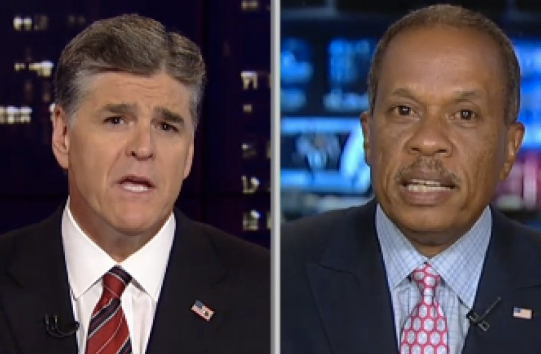 According to CNN, who cited three unnamed sources, Hannity allegedly turned on the weapon's laser sight "causing a red dot to bob around on Williams' body." The sources said that the off-camera incident in October "clearly disturbed" Williams and others present, though they added Hannity "was showing off," the CNN report adds.

Williams, who serves as an analyst for Fox News, downplayed the incident in a statement on Twitter.


(1/2) This incident is being sensationalized – everything was under total control throughout and I never felt like I was put in harm’s way.
— Juan Williams (@TheJuanWilliams) March 17, 2017

(2/2) It was clear that Sean put my safety and security above all else and we continue to be great friends.
— Juan Williams (@TheJuanWilliams) March 17, 2017


According to USAToday, Hannity's colleagues reportedly brought the gun incident to the attention of Fox News executives, CNN reported, though it remains unclear "whether anything came of it." The sources also claim it went to longtime executive and Fox News co-president Bill Shine, a friend of Hannity and a former show producer.

"Sean Hannity has been trained in firearm safety since he was 11 years old and has a license to carry a gun in five states, including New York," Fox News told CNN in a statement. "The situation was thoroughly investigated and it was found that no one was put in any danger," the Fox News spokesperson added, saying the incident was referred to the network's legal and human resources departments.


(2/2) It was clear that Sean put my safety and security above all else and we continue to be great friends.
— Juan Williams (@TheJuanWilliams) March 17, 2017