Jeffrey H. Smulyan, Founder and Chairman of the Board of Emmis Communications Corporation, has been announced as the recipient of the 2017 Lowry Mays Excellence in Broadcasting Award.

The award will be presented at the Broadcasters Foundation of America annual breakfast at 7:00AM, Wednesday, April 26  in the Brahms Room of the Encore Hotel during the National Association of Broadcasters’ (NAB) Show in Las Vegas.

Widely recognized as one of the most visionary leaders in the radio industry, Smulyan is the leading advocate of getting FM-enabled wireless devices in smartphones. Smulyan formed Emmis in 1980, which went public in 1994 and was named one of FORTUNE magazine’s “100 Best Companies to Work For.” Emmis owns and operates 16 FM and 3 AM radio stations, including two top hip-hop brands in the world -- KPWR Power 106 in Los Angeles and HOT 97 in New York City -- plus stations in Austin, St. Louis, and Indianapolis. 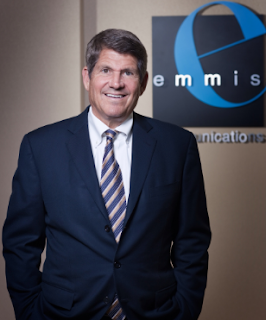 A former director of the NAB and former Chairman of the Radio Advertising Bureau, Smulyan served as past chair of the Central Indiana Corporate Partnership, and sits on the Board of Trustees of his alma mater, the University of Southern California.

Smulyan’s leadership has been recognized with the American Women in Radio and Television’s Silver Satellite and Star Awards, the NAB’s National Radio Award, Radio Ink’s Radio Executive of the Year, and Ernst & Young’s Entrepreneur of the Year. He has been inducted in the Broadcasting & Cable Hall of Fame and the Indiana Business Hall of Fame. The Broadcasters’ Foundation honored him with its Golden Mike Award, and he was named a “Giant of Broadcasting” by the Library of American Broadcasting.

The Lowry Mays Excellence in Broadcasting Award is bestowed annually on an individual in broadcasting whose work exemplifies innovation, community service, advocacy, and entrepreneurship. It salutes its namesake Lowry Mays and is underwritten by The Mays Family Foundation.

The breakfast is complimentary to all, although pre-registration is required. To register, or to obtain information on reserving a page in the Program Guide to honor Jeff Smulyan, please contact the Foundation at 212-373-8250.

For more than 70 years, the Broadcasters Foundation has distributed millions of dollars to thousands of needy broadcasters and their families.  Individual donations can be made to the Guardian Fund, corporate contributions are accepted through the Angel Initiative, and bequests can be arranged through the Legacy Society.  To learn more or to donate, please contact the Broadcasters Foundation at 212-373-8250 or visit www.broadcastersfoundation.org.
Posted 11:25:00 AM