Drudge To Trump 'Clear Out Climate Hysterics' From NWS

Internet news mogul Matt Drudge called for President Donald Trump to "clear out climate hysterics" from the National Weather Service after the federal agency incorrectly forecasted a snowstorm barreling the Northeast, according to BusinessInsider.

"What is going on with National Weather Service?" Drudge asked on Twitter when it became clear Tuesday's snowstorm, contrary to forecasts, would spare New York City and other major hubs. "Lots of misses piling up."

Drudge, who in October suggested without evidence that the federal government exaggerated the intensity of Hurricane Matthew to gin up fear over climate change, said Trump "should clear out climate hysterics from NWS."

While Tuesday's snowstorm didn't barrel through New York City as forecasters anticipated, it did slam other parts of the Northeast.

ABC News is reporting that before the first snow fell, meteorologists realized there was a good chance the late-winter storm wasn't going to produce giant snow totals in big Northeast cities as predicted.

But they didn't change their forecasts because they said they didn't want to confuse the public. 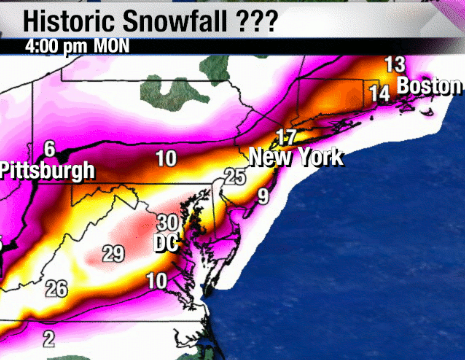 "Out of extreme caution we decided to stick with higher amounts," Greg Carbin, chief of forecast operations at the Weather Prediction Center in suburban Maryland, told The Associated Press. "I actually think in the overall scheme that the actions (by states and cities) taken in advance of the event were exceptional."

Carbin said a last-minute change downgrading snowfall totals might have given people the wrong message that the storm was no longer a threat. It still was, but real danger was from ice and sleet in places like New York City and Washington, he said.