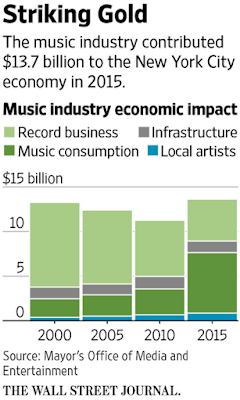 The New York City’s music industry is humming to the tune of $21 billion.

That is according to a new report released from the Mayor’s Office of Media and Entertainment, which also found that jobs and wages in the music industry—everything from artists to their lawyers and digital music startups—slightly outpace the broader New York City economy.

According to The Wall Street Journal, music jobs and wages grow at annual rates of 4% and 7%, respectively, compared with other total city jobs which grow at rates of 3% and 5%, according to the report that tracked figures from 2010-2015.

Taken together, artists, music consumption, the record business, infrastructure and support account for more than 30,000 jobs in the city and $13.7 billion in economic output, according to the report. New York City reaps $3.48 billion in indirect impact such as professional services, and $3.9 billion when those employed in the industry spend wages in the city.

New York City also is home to 72 music-related digital startups, far more than any other city in the world. Music-related tourism accounts for some $400 to $500 million annually, according to the report, and more than 5 million tickets are sold each year for major music events.

It is those live concerts and festivals where there is more demand than supply, which means that the city could support another large venue, according to Julie Menin, commissioner of the New York City Mayor’s Office of Media and Entertainment.
Posted 3:18:00 AM