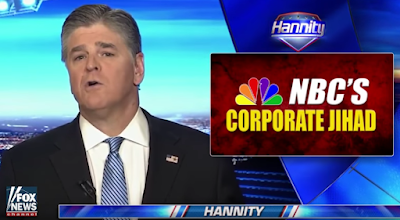 Mediaite reports he referred to Maddow as one of the “Trump-hating hosts over at NBC News, who is really one of the leaders of the alt-left propaganda destroy-Trump-at-all-costs media.”

After talking about the deep state and the concerning government leaks again, Hannity went back to NBC and said there is a “corporate jihad being waged by NBC News” against the president.

He said, “It proves that they will do anything, spin any conspiracy, to destroy the Commander-in-Chief.”

Hannity said that he laughed as he watched Maddow Tuesday night, calling it a “flat-out pathetic conspiratorial attempt to smear the president” and concluding, “NBC is not news. It is deep state Obama propaganda television.”

Meanwhile on Wednesday, Tucker Carlson Asserted that NBC News, not Russia was the real meddler in last fall;s presidential election. He vented about the theory that Russia won the November election for Donald Trump through some vague meddling. "As of today, there is no evidence that the Russian government tampered with voting machines or hacked any votes in November," reports Carlson. He added there's no evidence that the Russians collaborated with Donald Trump or his campaign to win the election.

"That tape belonged to NBC. It was shot by NBC cameramen for an NBC show on NBC property. So how did it wind up in the hands of The Washington Post, which broke the story?”

“How, in other words, did valuable intellectual property from one news organization end up benefitting a competitor? Intentionally, that’s the short answer.”
Posted 4:20:00 AM