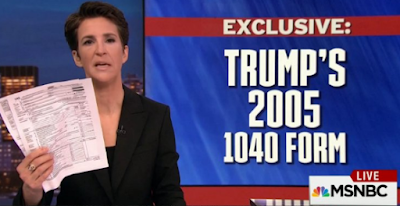 Tuesday evening’s episode of The Rachel Maddow Show, in which the eponymous host and Daily Beast contributor David Cay Johnston revealed President Trump’s 2005 tax returns, scored huge ratings, beating out all other cable-news competitors, according to The Daily Beast.

According to Nielsen data, the show raked in 4.1 million viewers, beating out Fox News (which normally wins the cable-news set for the 9 p.m. hour), CNN, and the rest of all cable television.

Additionally, that viewership figure was enough to beat out even ABC and Fox broadcast-network ratings during the 9 p.m. ET hour. This was the highest-rated program ever for The Rachel Maddow Show in both total viewership and the key ages 25-54 demographic.

Maddow teased this particular evening’s show with a tweet—“BREAKING: We’ve got Trump’s tax returns. Tonight, 9pm ET. MSNBC. (Seriously.)”—and was widely mocked for how long it took the host to finally reveal what many ultimately viewed to be a lackluster scoop on the president’s old tax returns.

President Donald Trump blasted as “fake news” Maddow’s program in which she got her hands on two pages of his 2005 IRS 1040 form. 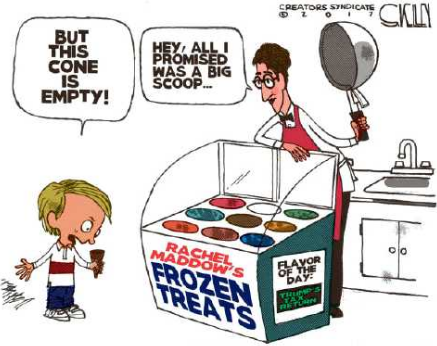 Deadline reports Trump wasn’t the only critic of the broadcast, which was nicked by some viewers and TV-industry navel lint gazers as being a whole lot of buildup – she’d kept viewers panting for about 24 minutes before finally getting down to the info she’d obtained – for very little bang.