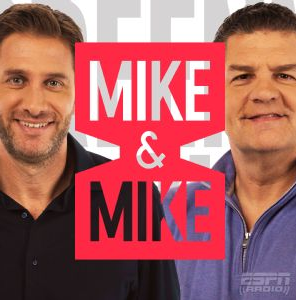 Mike Golic will be just fine if his 17-year partnership with Mike Greenberg comes to an end in the coming months, according to The Sporting News.

He would prefer to continue his long-running "Mike & Mike" morning show with a new partner. It would be "awesome" if his new tag-team partner was his son, Mike Golic Jr., who has become a regular on his dad's weekday ESPN morning show (6-10 a.m. ET).

So says the 54-year old Golic in what amounts to the first public comments by him, Greenberg or ESPN about the possible breakup of one of the most successful on-air tandems in sports TV/radio history.

That would end Golic's partnership with Greenberg, a tag team that started on ESPN Radio in 2000, then expanded to television, where their Bristol, Conn.-based show has been simulcast since 2004.

That also would raise this question: Will Golic even stay with ESPN? Or will he jump to another TV/radio network?

Of course, that all depends on his bosses at ESPN, who are planning sweeping layoffs of on-air talent over the coming months. (ESPN declined to comment for the Sporting News story)

"I would imagine I would continue to do that show. We haven’t gotten that far, quite honestly, as to if the show is going to end, when it’s going to end, and when it ends, and if it does end, what's going to happen with the show?" Golic told Sporting News in an interview last week.

Among those rumored to be Golic's new "Mike & Mike" partners are his son and Trey Wingo of "NFL Live." Like any proud father, Golic would love to work with Mike Jr.
Posted 3:24:00 AM