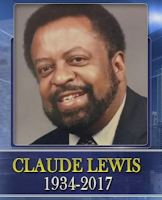 Claude Lewis, 82, a distinguished journalist who made history as the first person of color to write a regular newspaper column in Philadelphia and inspired generations of African Americans to follow him into the profession, died Thursday, March 16.

After battling diabetes for years, Mr. Lewis died of complications from the disease, according to
philly.com. The illness claimed his vision beginning a decade ago.

In 1965, the Evening Bulletin hired Mr. Lewis away from NBC for the city staff. Mr. Lewis started out as a general assignment reporter, but in 1968, George R. Packard, then the managing editor, invited him to write a column three times a week.

“I had known him from Newsweek magazine, where we both worked," Packard said. "I knew his work, and he was good. When I was promoted to managing editor, I thought of Claude. He could really add so much to the newsroom with his point of view. He was not bitter or angry. He was dedicated to fairness and justice."

Mr. Lewis’ appearance as a columnist — a challenge he met with evenhanded grace — made him an instant icon to the community at large, and especially to African Americans.

In his columns, Mr. Lewis ranged as far afield as boxing and politics, but he homed in on America’s civil rights era and its leaders, including Langston Hughes, James Baldwin, Malcolm X, and the Rev. Dr. Martin Luther King Jr. His ability to rub shoulders comfortably with such national figures produced telling portraits of them for his readers.
Posted 3:00:00 AM