(Reuters) -- Viacom Inc CEO Philippe Dauman railed at critics of his leadership after a fifth straight quarter missing Wall Street's sales estimates on Tuesday, unnerving investors and sending the media company's shares down more than 21 percent to a five-year low.

They were Dauman's first public remarks since replacing the ailing 92-year-old Sumner Redstone as executive chairman last week, an appointment that was opposed by Redstone's daughter and greeted by skepticism by some investors.

"Our outlook and the facts have been distorted and obscured by the naysayers, self-interested critics and publicity seekers," Dauman said on a call with analysts following the results as he was questioned over his strategy.

Viacom and to a lesser extent CBS, both majority-owned by Redstone, have come under scrutiny in light of Redstone's declining health, which is the subject of a lawsuit brought by one of his ex-girlfriends.

Investors are increasingly concerned over Viacom's handling of its relationships with the cable and telecom companies such as Dish Network Corp, Comcast Corp and AT&T Inc that pay to distribute its shows.

Viacom cut its fiscal 2016 growth outlook for the fees it gets from affiliates to "low to mid single digits" from high single digits, citing numerous issues.

Viacom's shares closed down 21.5 percent at $32.86 on Nasdaq, their lowest mark in almost five and a half years, shedding $3 billion in market value. They are now down more than 50 percent over the past 12 months.

On the conference call on Tuesday, Dauman said Redstone and he were "in harmony" about the company's strategy. Redstone, who is now chairman emeritus, was on the call, according to Viacom, but did not speak.

The lack of confidence in Dauman and the range of issues he faces unsettled some.

"The majority of investors think that the business or management or both are impaired," said Brian Wieser, a Pivotal Research analyst. "It's almost like a big bath of concerns."

Some investors are skeptical that Dauman can turn Viacom's fortunes around. His next big test will be wrapping up talks with Dish over whether the cable operator will continue to carry Viacom's networks and at what price. Dauman said negotiations have been extended and he expects the two to reach an agreement.

Investors are also waiting for the outcome of a hearing scheduled for Feb. 25 in a New York court determining whether Dauman can be deposed as a witness in the legal dispute over Redstone's mental competence.

Dauman talked about "noise," as a factor that had been obstructing the company's performance, an apparent reference to the legal battle over Redstone's health.

"I think his statement illustrates the level of denial that is concerning investors," Rich Greenfield, an analyst with BTIG Research, told Reuters after the call.

Dauman hinted that Viacom may take action against cable provider Comcast, which moved Spike, CMT, Pop and some other CBS networks to a higher-priced package.

"They have violated our agreements and we are not going to sit back," Dauman said, when asked if Viacom might sue. "We will preserve our rights as we go forward."

In an emailed statement, a Comcast spokesman said the company is moving some networks to higher pay packages in response to higher programming costs.

For the first quarter of its fiscal 2016, the owner of MTV, Comedy Central, Nickelodeon and movie studio Paramount reported a steeper-than-expected drop in quarterly revenue, hurt by lower advertising sales in the United States. 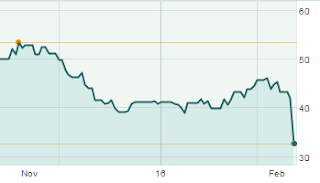 It said domestic advertising revenue fell 4 percent, as price increases were more than offset by a decline in traditional ratings at some of Viacom's networks.

That was slightly better than the consensus among analysts, who expected a 5 percent decline. The drop was an improvement from the September quarter's 7-percent fall.

Total revenue declined 5.7 percent to $3.15 billion, below the $3.26 billion Wall Street had expected, according to Thomson Reuters I/B/E/S.

Analysts and investors said it remains to be seen what the partnership means for Viacom, but agreed that it is a step in the right direction.

"I think the stock drop is a bit of an overreaction," said Salvatore Muoio, whose firm is one of the top holders of voting shares of Viacom. "Everything had a lot of minus signs in front of it... but I am buying today."
Posted 4:20:00 AM