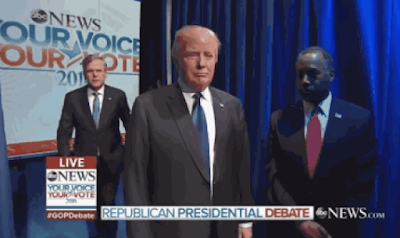 The eighth Republican presidential debate on ABC Saturday night got off to a rocky start as the seven remaining GOP contenders stumbled over themselves — and each other — to make it to their podiums.

It was downright odd. Moderators David Muir and Martha Radditz called out each name and it was almost as if the candidates themselves had forgotten what should happen next  (more likely if the candidates starting wirth Ben Carson didn't hear their names announced).