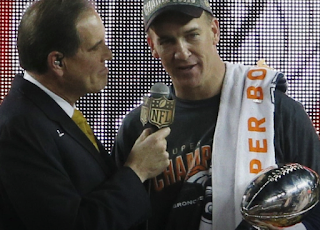 Peyton Manning gave Budweiser “probably the most valuable celebrity endorsement in history” on Sunday night when the Denver Broncos quarterback told a reporter in a live postgame interview that he was going to “drink a lot of Budweiser” to celebrate winning the Super Bowl.

The Guardian reports almost immediately, Budweiser’s head of marketing Lisa Weser tweeted that she and her colleagues were as happy as Jerry, Elaine and George doing the Seinfeld celebration dance.

Weser, who also retweeted a tweet saying that Manning’s shoutout to Budweiser was “the most badass move of all time”, quickly added that the company had not paid Manning to mention its beer and was “surprised and delighted that he did”.


Hi Internet. For the record, Budweiser did not pay Peyton Manning to mention Budweiser tonight. We were surprised and delighted that he did.
— Lisa Weser (@LisaWeser) February 8, 2016


Brand and marketing expert Mark Borkowski said Manning’s endorsement of Budweiser was far more valuable to the brand than any commercial during the game could have been, because moments that appear to be “so off the cuff and so innocent have so much more cut through [than traditional adverts]”.

Borkowski said it was not possible to work out how much Manning’s endorsements were worth to Budweiser, but said it would be much more than than the $5M many companies paid for 30-second commercial slots.

Manning is part-owner of a pair of Anheuser-Busch distributors. That had people on social media calling foul, decrying the company’s free advertising and Manning’s lack of transparency about his ownership.  Manning gave some free TV time to Papa John’s founder John Schnatter, hugging him after the game. Manning is paid to do ads for Papa John’s and he also owns 32 of the pizza delivery franchises.
Posted 3:22:00 AM