Trump Thanks Morning Joe For Being "Supporters" 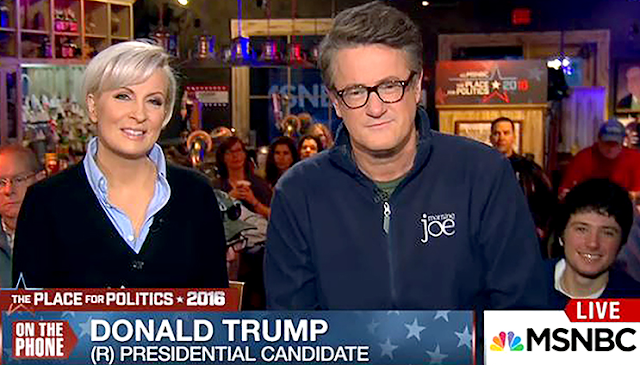 A day after his resounding victory in New Hampshire, Donald Trump made a point to thank two of his "supporters" -- the hosts of MSNBC's "Morning Joe."

"You guys have been supporters," Trump told co-hosts Joe Scarborough and Mika Brzezinski at the end of an interview on Wednesday. "And I really appreciate it. And not necessarily supporters, but at least believers. You said there's some potential there."

According to CNN, Trump also told the hosts "it was great" seeing them the previous evening. Scarborough and Brzezinski visited Trump's hotel room on Tuesday night while the New Hampshire primary results were rolling in, according to two sources with knowledge of their visit.

Scarborough posted a series of tweets accusing CNN of lying about him. "Your sources are wrong," he wrote. Scarborough did not explicitly deny that he visited Trump's hotel room, however.

The Morning Joe hosts instead did what anchors are supposed to do — they interviewed the candidate’s senior staff to get background information on their strategy in New Hampshire, and on their campaign’s plans moving forward in South Carolina. The staff then invited the hosts to get Mr. Trump’s reaction to the victory. That discussion lasted less than five minutes. Other networks were allowed interviews as well.

It should be noted that Morning Joe is off to a great start in this election year. In January, the show had 28% more viewers than CNN’s morning show last month. And thus far in February, more people are watching Morning Joe than CNN.

Trump has a unique relationship with "Morning Joe." He's appeared on the show far more than any other MSNBC program -- although most of those "appearances" have come over the phone, as was the case Wednesday.  Last month, conservative radio host Hugh Hewitt even floated the possibility of Scarborough serving as Trump's running mate. Scarborough shot down the idea.