The Coming Political Boom For Radio 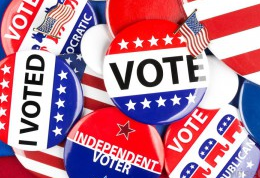 Radio’s role during election season is usually serving as a destination for those non-political advertisers who have been squeezed off of local TV by the deluge of political ads that land just before voters head to the polls.

And this year radio will benefit from plenty of that business again. But it will also be receiving more of the political advertising itself.

Already this year candidates have been very active on the radio in Iowa, New Hampshire and South Carolina, and buyers say they expect that to continue through primary season and into the fall.

Indeed, experts such as Borrell Associates, the Williamsburg, Va., ad tracking firm, project that spending on radio will rise in this election year, from $803 million in 2012 to $827 billion.radio-2b

That’s a 3 percent gain, a substantial number for a medium that’s been losing overall ad dollars for years. If you include the primary spending in 2015, total radio spending will hit $1.19 billion, the first time political has ever surpassed $1 billion on radio.

“Radio hasn’t always pulled in the same political spending dollars as TV, however that is slowly changing,” one buyer told MediaLife Magazine.

“In 2016, expectations are that 10 to 15 percent of the political spending will go into radio. The radio political experts believe could be as much as $1 billion.” 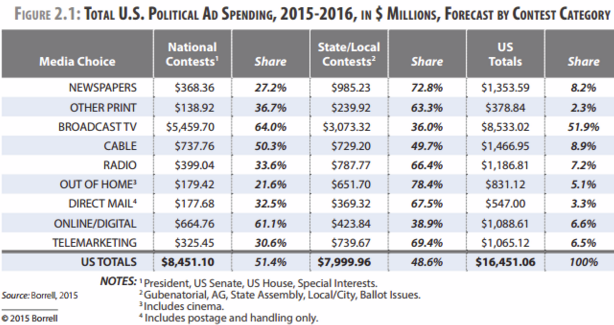 Why the gains for radio? Two main reasons. First, TV has become cluttered with political ads. From local broadcast to cable to syndication and all the other forms of TV ads, candidates and their PACs will spend nearly $5.8 billion this year.

That certainly makes it hard to stand out.

Second, it’s cheaper, which is appealing to candidates at this point in the race. Many of them are facing financial constraints – Jeb Bush and Marco Rubio reportedly have money troubles – and so radio ads may be preferable to more expensive TV ones.
Posted 7:18:00 AM