A new report from Nielsen details just how central sports have become to Americans’ media habits. 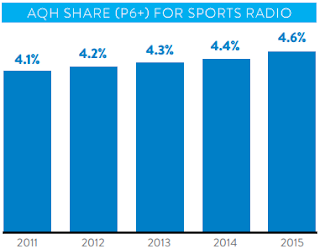 Of the top 100 live TV programs on television last year, 93 percent were sporting events. That’s up from 14 percent in 2005, astonishing growth.

Further, Nielsen found that sports accounts for half of all conversations related to TV on Twitter last year, though they made up just 1.4 percent of all content on television.

And smartphone users spent 1.2 million hours on sports-related sites, up 22 percent from the previous year.

New media has clearly had a big role in the rise of sports, reports MediaLife. 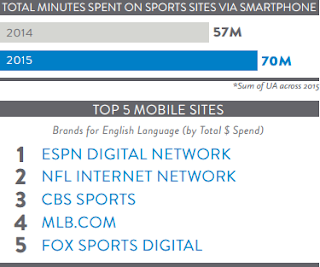 Viewership of live TV overall has fallen the past 10 years. Nielsen notes that only 66 percent of viewing for dramas now takes place live.

But 95 percent of sports viewership occurs live. That’s an important distinction for advertisers, who often have time-sensitive messages. If, for instance, a sale is taking place the day after a program airs, it’s worthless for the ad about that sale to be seen a week later through timeshifting.

Because of sports’ time-sensitive nature, they’ve gotten more important to advertisers as they simultaneously become more popular.
Posted 3:33:00 AM