➦In 1916...Journalist Daniel Schorr born (Died at 93 – July 23, 2010). He covered world news for more than 60 years. He was most recently a Senior News Analyst for National Public Radio (NPR). Schorr won three Emmy Awards for his television journalism. Born in the Bronx, NY, he began his journalism career at the age of 13, when he came upon a woman who had jumped or fallen from the roof of his apartment building. After calling the police, he phoned the Bronx Home News and was paid $5 for his information.

Following several years as a stringer, in 1953 he joined CBS News as one of the recruits of Edward R. Murrow (becoming part of the later generation of Murrow's Boys).   Schorr died from an apparent "short illness" on July 23, 2010, at a Washington, D.C. hospital. He was 93 years old. Schorr's last broadcast commentary for NPR aired on Saturday, July 10, 2010.

➦In 1920...The first news program to be broadcast on radio was aired. The station was 8MK in Detroit, MI.
8MK soon became WWJ and was founded by The Detroit News; the mixed letter/number calls were assigned to the station by the United States Department of Commerce Bureau of Navigation, the government bureau responsible for radio regulation at the time. The 8 in the call sign referred to its location in the 8th Radio Inspection District, while the M in the call sign identified that the station operated under an amateur license. It is not clear why the Detroit News applied for an amateur license instead of an experimental license. As an amateur station, it broadcast at 200 meters (the equivalent of 1500 AM).

8MK was initially licensed to Michael DeLisle Lyons, a teenager, and radio pioneer. He assembled the station in the Detroit News Building but the Scripps family asked him to register the station in his name, because they were worried this new technology might only be a fad, and wanted to keep some distance. Later that year, Michael and his brother Frank, also assembled the first radio in a police car in Toledo, Ohio (with Ed Clark who started WJR 760 AM in Detroit). They captured a prowler using the radio, making national headlines. RCA got the contract to install radios in police cars across the country.

➦In 1942...'The Adventures of Superman', the long-running radio serial which started in 1940 on WOR NYC, moved to the  Mutual Broadcast System. It aired as a 15-minute serial, running three or, usually, five times a week. From February 7 to June 24, 1949, it ran as a thrice-weekly half-hour show. The series shifted to ABC Saturday evenings on October 29, 1949, and then returned to afternoons twice a week on June 5, 1950, continuing on ABC until March 1, 1951. In all, 2,088 original episodes of The Adventures of Superman aired on radio.

➦In 1981...WXLO 98.7 FM (now sports WEPN) NYC adopted the “Kiss” brand as  The station completed its  transition to new urban contemporary format. Early on, WRKS played a great deal of R&B and dance music, and became an almost instant hit with listeners, as its ratings skyrocketed from 22nd place to third. Notable Kiss FM Mixmasters at the time were Shep Pettibone and the Latin Rascals, who relied heavily on freestyle music. Longtime urban contemporary leader WBLS was caught off-guard by the sudden rise of the new station. 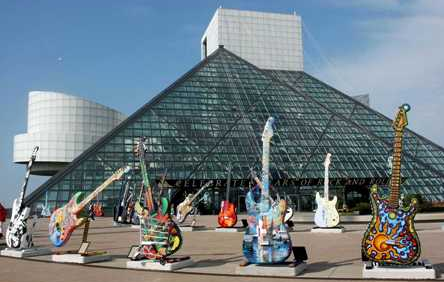 ➦In 1995...The Rock and Roll Hall of Fame and Museum opened in Cleveland, Ohio with a seven-hour concert featuring dozens of artists.

Working for WNEW-AM in New York at the time, Pappas began his report as Oswald came into view:

"Now the prisoner, wearing a black sweater, he's changed from his T-shirt, is being moved out toward an armored car. Being led out by Captain Fritz." (car horn sounds) There's the prisoner. (Pappas holds his microphone out towards Oswald) Do you have anything to say in your defense..."

As Pappas asked Oswald the question, Jack Ruby stepped out of the crowd of reporters with a pistol, moved in front of Oswald and fired one shot into Oswald's abdomen.

➦In 2011...The 1985 Dire Straits’ song “Money For Nothing,” was reinstated on Canadian radio playlists after a public outcry resulted from the Canadian Broadcast Standards Council (CBSC) labelling of the song as “unacceptable”.  That decision was made based on onecomplaint from a radio listener, who objected to the song’s use of the word “faggot.”  Said broadcaster Alan Cross, “it made us look silly in the eyes of the broadcast community around the world.”

➦In 2011...CHUM personality and manager Bob Laine died at age 72.  Laine began his radio career at CFRS in Simcoe, Ont., but quickly moved to CHUM Toronto, signing on as the all-night DJ in May 1958.

He stayed there, with his signature opening, "Good morning world, this is Bob-O. Good morning Bob-O, this is world," for a decade, with one brief interruption.

"The Voice" left CHUM in March 1962 for a very short stint as CFGM's morning man but was back at the overnight show in May of that same year.

Mr. Laine moved to afternoons in 1968 and then into management in the 1970s as program director of CHUM-FM. He retired in 2003 as a corporate vice-president after almost 46 years with the company.