The Rundown: Trump Heads to Kenosha

TRUMP HEADING TO KENOSHA DAY AFTER BLAMED BY BIDEN FOR VIOLENCE, DEFENDING TEEN CHARGED IN KILLING OF TWO: President Trump is heading today to Kenosha, Wisconsin, the site of at-times violent protests that began after a 29-year-old Black man, Jacob Blake, was shot seven times in the back by police, leaving him paralyzed. Tensions were heightened even more after a 17-year-old from Illinois, Kyle Rittenhouse, armed with a semi-automatic rifle, allegedly shot and killed two protesters last week. Local leaders, including Democratic Governor Tony Evers had asked Trump not to come for fear of aggravating the situation, but the White House said he is going and will meet with law enforcement and tour damage caused by protester violence. Trump said in a Fox News interview last night, "I am a tremendous fan of law enforcement and I want to thank law enforcement." He also suggested that police sometimes "choke" in difficult situations, comparing it golfers who, quote, "miss a 3-foot putt." 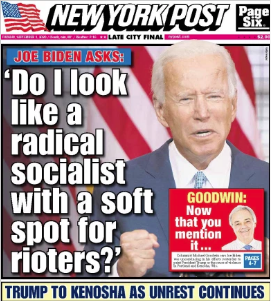 The visit comes one day after his Democratic presidential opponent Joe Biden delivered a scorching speech in which he accused Trump of being responsible for the divisions that have led to the violence and of, quote, "rooting for chaos and violence." He declared, "He can’t stop the violence because for years he’s fomented it." He also fired back at Trump and the Republicans' warnings about violence under a Biden presidency, saying, "These are not images of some imagined Joe Biden America in the future. These are images of Donald Trump's America today." Biden also any condemned looting, vandalism and rioting by protesters, saying, "It's lawlessness, plain and simple"

Trump spoke at a news conference later in the day, and again blamed the violence on far-left radicals that he charged are supported by Biden. "The violence is fueled by dangers, rhetoric from far left politicians that demonize our nation and demonize our police." When asked about Rittenhouse, who is facing homicide charges, Trump wouldn't denounce the killings and suggested Rittenhouse was acting in self-defense, saying, "He was in very big trouble. He would have been -- you probably would’ve been killed." Biden released a statement after Trump's news conference saying, "Tonight, the president declined to rebuke violence. . . . He is too weak, too scared of the hatred he has stirred to put an end to it."


➤U.S. PASSES SIX MILLION CORONAVIRUS CASES: The U.S. on Monday passed six million confirmed coronavirus cases, with Johns Hopkins University's count at more than 6,030,000 as of early this morning, with more than 183,500 deaths. As the pandemic continues to drag on, White House coronavirus task force coordinator Dr. Deborah Birx warned that Americans can't let their guard down. She urged Americans to follow the guidelines, emphasizing that it's particularly key if they're concerned about making sure economies stay open, saying, "Right now, we gain freedom through wearing our masks and socially distancing."

➤APPEALS COURT REFUSES TO ORDER MICHAEL FLYNN PROSECUTION DISMISSED: A federal appeals court yesterday refused to order the dismissal of the prosecution of Michael Flynn, President Trump's first national security adviser, allowing a judge to go forward with examining the Justice Department's request to dismiss its case against Flynn. Both Flynn's attorneys and the Justice Department were trying to force the prosecution to be dropped without the judge looking any further into it. The Justice Department in May said it was dropping the prosecution despite Flynn pleading guilty to lying to the FBI about his contacts with the Russian ambassador during the 2016 presidential transition. The Justice Department said the FBI interview with Flynn should never have taken place because his contacts with the ambassador were "entirely appropriate," and also said the lie he told wasn't "material" to an investigation. But U.S. District Judge Emmet Sullivan refused to grant the highly unusual dismissal request, and instead scheduled a hearing and appointed a retired federal judge, John Gleeson, to argue against the request. Gleeson questioned the Justice Department's motives and called it a, quote, "gross abuse" of prosecutorial power. The appeals court said there was no basis to stop Sullivan from moving forward with the planned hearing.


➤NAVY PLANE CRASHES IN VIRGINIA, ALL FOUR CREWMEMBERS SURVIVE: A Navy surveillance plane crashed near Wallops Island, Virginia, yesterday afternoon, with all four crew members surviving after they bailed out using the parachutes they are required to wear on board. Naval Air Force public affairs said E-2 Hawkeye aircraft was on a training flight. The cause of the crash is being investigated.

➤DELTA, AMERICAN DROP CHANGE FEES DAY AFTER UNITED: One day after United Airlines dropped most ticket change fees for domestic flights, Delta Air Lines and American Airlines followed suit and did the same thing, ending the $200 change fee. Since Southwest Airlines never charged ticket change fees, the four biggest U.S. carriers now have similar policies. Delta and American said they have permanently eliminated change fees for all domestic flights for premium and most economy fares except the lowest fare, called basic economy. Ending the fee comes as airlines, which are suffering financially amid the pandemic, are trying to get people to return to flying.

➤LIBERTY UNIVERSITY TO INVESTIGATE FALWELL JR.'S TIME AS PRESIDENT: The board of Liberty University announced Monday that it's opening a wide-ranging, independent investigation into Jerry Falwell Jr.’s tenure as president of the evangelical school. There have been calls for an investigation since Fallwell left the university last week that he'd led since 2007 amid a sex scandal. Giancarlo Granda, a young business partner of Falwell's family, claims he had a sexual relationship with Falwell's wife, Becki Falwell, for years, and that Jerry Falwell participated in some of the sexual encounters by watching them. The Falwells have acknowledged an affair between Granda and Becki, but Jerry has denied participating, and they accused Granda of trying to extort them over the relationship.

➤U.S. OPEN GETS UNDERWAY: The U.S. Open began in Queens, New York, on Monday, the first tennis Grand Slam tournament in nearly seven months after Wimbledon was canceled and the French Open postponed to late September due to the coronavirus pandemic. No fans will be allowed in the stands for the tournament, whose opening day saw wins by the top-seeded men and women, Novak Djokovic and Karolina Pliskova, as well as 2018 champion Naomi Osaka and 2016 champion Angelique Kerber among the women, and Stefanos Tsitsipas and Alexander Zverev among the men. Sixteen-year-old American Coco Gauff was among those who lost in their first-round matches.

➤NFL TAKES OVER WASHINGTON TEAM PROBE: The NFL has taken over the independent investigation into workplace conduct on the Washington Football Team. Owner Dan Snyder confirmed the news yesterday, saying he and his wife suggested it to Commissioner Roger Goodell, quote, "so that the results are thorough, complete and trusted by the fans, the players, our employees and the public." Snyder hired a law firm to carry an investigation after The Washington Post reported last month that 15 female former employees said they were sexually harassed during their time with the organization. The Post last week reported more allegations, including ones that personally involved Snyder. He denied the claims, including that he invited a cheerleader to a hotel room with one of his friends in 2004.

➤IOWA STATE TO HAVE 25,000 FANS AT FOOTBALL HOME OPENER: Iowa State plans to allow some 25,000 fans to attend the football team's home opener on September 12th, the news coming even as Iowa was identified as the worst coronavirus hot spot state by the New York Times, and Ames, home to Jack Trice Stadium, the country's worst hot spot city. Iowa State said they will be using social distancing and mitigation strategies at the stadium that normally holds over 60,000 people, which will include mandatory face masks. The Story County Board of Health requested in June that Iowa State not have fans at home games.

➤FAMILY MEMBERS BEGIN TO BE ALLOWED INTO NBA BUBBLE: Players' family members began to be allowed into the NBA bubble at Walt Disney World on Monday, after arriving in Orlando last week so they could quarantine before being allowed in. Once there, they'll have to undergo the same daily coronavirus testing as players and staff. Yesterday was chosen as the date to begin to allow family members in because it would be into the second round of the playoffs, so the number of people in the bubble would be reduced after eight more of the original 22 teams for the restarted season had left. The players began arriving at the Disney World complex on July 7th.

➤NFL END ZONES WILL HAVE SOCIAL JUSTICE MESSAGES: The NFL this season will have two messages inscribed in its end zones: "It Takes All Of Us" on one and "End Racism" on the other. It's being done as part of the league's social justice awareness initiatives, which will also allow similar messages on helmets and caps. A T-shirt designed by Houston Texas safety Michael Thomas will also be allowed to be worn during warmups, which says, "Injustice against one of us is injustice against all of us," on the front and "End racism" on the back.

➤STORMS: Tropical Depression Fifteen has formed off the East Coast, and, while expected to become Tropical Storm Nana, is not expected to be a threat to any land areas. The newly-formed depression was centered around 200 miles south of Hatteras, North Carolina, at 5 p.m. EDT Monday. A Hurricane Hunter mission confirmed a closed surface low with enough thunderstorms organized around it to deem it a tropical cyclone by the National Hurricane Center.
Posted 4:04:00 AM