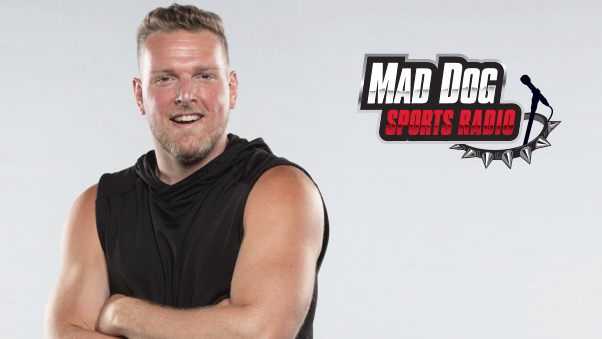 SiriusXM has announced that Pat McAfee, who since his retirement in 2017 from an All-Pro NFL career has become one of sports media’s most popular and compelling personalities, is making SiriusXM’s Mad Dog Sports Radio channel the exclusive radio home of his daily The Pat McAfee Show. McAfee announced the news on his show today.

McAfee will make his SiriusXM debut on Wednesday, September 9, and will host the show live from his studios in Indianapolis, IN every weekday from noon to 3:00 pm ET.

“I’m very thankful and honored for the chance to be on Mad Dog Sports Radio,” said McAfee. “SiriusXM is such an incredibly massive platform and the freedom it allows is perfect for our style of show. To say we’re grateful to Scott Greenstein, Steve Cohen, Andrew Moss and all of the other awesome folks at SiriusXM for this opportunity would be an understatement. Let’s do the damn thing. We hope you’ll join us daily.”

“Pat is absolutely a one-of-a-kind talent,” said Scott Greenstein, SiriusXM’s President and Chief Content Officer. “His experience as an athlete, his perspective on sports and the larger world around it, his skill as an interviewer, and his ability to relate to and entertain an audience, are just some of the things that set him apart from so many others in media. We’re very excited to have his energy and personality on SiriusXM. There are no limits to what he’ll be able to do on the Mad Dog Sports Radio channel.”

After an eight-year NFL career with the Indianapolis Colts that saw him voted to two Pro Bowls and be named a First Team All-Pro in 2014, McAfee retired in 2017 to embark on his media career. McAfee joined Barstool Sports, where he developed the “Heartland” division of the company in Indianapolis, and hosted The Pat McAfee Show on the Barstool Power 85 channel on SiriusXM. In 2018, McAfee joined Fox in a broadcasting role for their college football and NFL broadcasts. In 2019 McAfee signed with ESPN, where he serves as the color analyst for their Thursday Night College Football broadcasts and makes regular appearances on other ESPN programs.

In 2018, McAfee began appearing on WWE programming as a pre-show analyst for the companies’ NXT Takeover events, and signed a multi-year contract with WWE the following year. He performed in his first NXT TakeOver bout on August 22. McAfee is also a stand-up comedian, small business owner, and hosts his own daily podcast.

With the addition of The Pat McAfee Show to the Mad Dog Sports Radio lineup, Morning Men with Evan Cohen and Mike Babchik will air from 6:00-9:00 am ET daily, and Schein on Sports with Adam Schein will air from 9:00 am-noon ET daily. Christopher Russo hosts the channel’s anchor program, Mad Dog Unleashed, every weekday from 3:00 – 6:00 pm ET.