The Rundown: Biden Calls On Trump to Condemn Violence

➤TRUMP AND PORTLAND MAYOR EXCHANGE ACCUSATIONS AFTER VIOLENCE; TRUMP TO GO TO KENOSHA: President Trump on Sunday posted a string of tweets and retweets in which he praised supporters who clashed with protesters in Portland, Oregon, Saturday night that led to the death of one person, and also announced he will go to Kenosha, Wisconsin, Tuesday, where protests have been held and sometimes turned violent after Jacob Blake, a 29-year-old Black man, was shot seven times in the back by police last week, leaving him paralyzed. Trump's actions led Democrats to accuse him of trying to stoke racial tensions and incite violence because he thinks it will help his reelection campaign. The man shot and killed in Portland was identified as a supporter of a right-wing group, among a large caravan of Trump supporters who drove into Portland and clashed with Black Lives Matter protesters in the city.

Trump, who has been pushing a "law and order" message, took aim at Portland Mayor Ted Wheeler, calling him a "dummy" and a "Radical Left Democrat," but Wheeler blamed Trump, saying in a news conference, "It’s you who have created the hate and the division." Wisconsin Democratic Governor Tony Evers asked Trump yesterday to reconsider his plans to come to Kenosha, saying, "I am concerned your presence will only delay our work to overcome division and move forward together." But the White House said Trump is still going. In addition to the demonstrations in Kenosha, two protesters were killed and a third wounded last week when 17-year-old suspect Kyle Rittenhouse allegedly opened fire. Rittenhouse, armed with a semi-automatic rifle, had traveled to Kenosha from Illinois.

Meanwhile, Democratic presidential nominee Joe Biden released a statement in which he condemned the violent protests and called on Trump to follow suit. The former vice president said, "I condemn violence of every kind by anyone, whether on the left or the right. And I challenge Donald Trump to do the same." Biden warned, "We must not become a country at war with ourselves," and put blame on Trump, saying, "Donald Trump has been President for almost four years. The temperature in the country is higher, tensions run stronger, divisions run deeper. And all of us are less safe because Donald Trump can't do the job of the American president."

➤HURRICANE LAURA DEATH TOLL UP TO 18: The death toll attributed to Hurricane Laura in the U.S. has risen to 18, all of them in Texas and Louisiana, with more than half of the fatalities caused by carbon monoxide poisoning from unsafe operation of generators amid power outages. 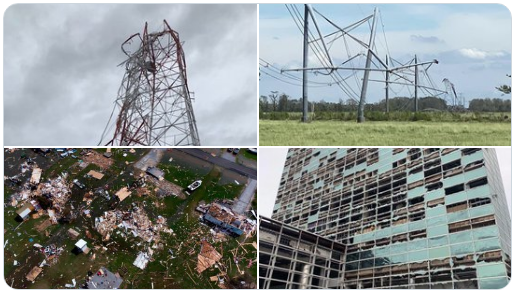 Hundreds of Federal Emergency Management Agency workers have been sent to the region to help with search and rescue and other efforts in the wake of the Category 4 storm that made landfall Thursday morning at Cameron, Louisiana, not far from the Texas border, with 150-mile per hour winds and storm surge as high as 15 feet in some places. Louisiana Governor John Bel Edwards said Sunday that the recovery will take some time, saying at a news conference, "We’re going to be working really, really hard on the power outages, on the water systems, on the housing. But none of this is going to be easy. It’s not going to happen as quickly as most people would like for sure.

➤FDA COMMISH OPEN TO EMERGENCY USE AUTHORIZATION OF VACCINE BEFORE HUMAN TRIALS COMPLETE: Food and Drug Administration Commissioner Stephen Hahn said in a Financial Times interview published yesterday that he's open to issuing an emergency use authorization for a coronavirus vaccine before human trials end. Hahn said this could happen because, quote, "the benefit outweighs the risk in a public health emergency." The commissioner also said he wouldn't give in to political pressure from President Trump or others, saying, "This is going to be a science, medicine, data decision. This is not going to be a political decision." However, public health experts criticized the idea of authorizing a vaccine before human trials are done, with virologist Dr. Angela Rasmussen of Columbia University, for one, saying it would be unethical, put people at risk, and damage public confidence in vaccines.

There have been more than 183,000 deaths in the U.S. from the coronavirus as of early this morning, according to Johns Hopkins University's count, and more than 5,997,000 confirmed cases.

➤ST. LOUIS POLICE OFFICER KILLED BY GUNMAN: A 29-year-old St. Louis police officer died Sunday after being shot in the head by a gunman who'd barricaded himself in a home Saturday evening. In addition to the fatal shooting of Officer Tamarris L. Bohannon, another officer was shot in the leg. According to police, the 43-year-old gunman ordered a family out of their home at gunpoint and barricaded himself inside for almost 12 hours. He was taken into custody around 5:30 a.m. on Sunday. Police were searching for another reported shooting victim when the gunman shot Bohannon and the other officer.


➤'AXIOS': TRUMP OFFERED KELLY FBI DIRECTOR JOB IN 2017 IF PLEDGED LOYALTY TO HIM: President Trump offered John Kelly, who was then Homeland Security secretary, the position of FBI director one day after he fired James Comey from the job in May 2017, but required that Kelly pledge loyalty to him, Axios reported Sunday, citing New York Times reporter Michael Schmidt's upcoming book. According to Axios, Schmidt writes in his book of the offer from Trump: "Kelly needed to be loyal to him, and only him." Kelly, who later became White House chief of staff, pushed back, according to Schmidt's book, saying that he'd be, quote, "loyal to the Constitution and the rule of law," but refusing to pledge loyalty to Trump. Andrew McCabe instead became acting director, and Christopher Wray, the current director, took over in August 2017. '

➤UNITED AIRLINES DROPPING TICKET CHANGE FEE: United Airlines said Sunday that it's dropping it's $200 fee for most people who change a ticket for travel within the U.S. United said it eliminated change fees for people who buy a standard or premium economy ticket for U.S. travel, and will extend a broad pandemic-related waiver of change fees, including for international travel, though December 31st. United's policy change comes as airlines are trying to get people to return to flying amid the pandemic. Although U.S. air travel has recovered some since its bottom in April, passengers are still down some 70 percent from a year ago.

➤DISNEY WORLD TO LET GUESTS WEAR HALLOWEEN COSTUMES: Disney World announced Friday that it will allow all guests to wear Halloween costumes in the Magic Kingdom from September 15th through Halloween, October 31st, during normal operating hours. That's a change from Disney's usual rules, which ban adults and guests over 13 from wearing costumes during regular hours, except during Mickey's Not-So-Scary Halloween Party. The change is coming after Disney canceled the annual Not-So-Scary Halloween Party due to the coronavirus pandemic. There will be some costume rules, however, including no full-face masks or costumes that "reach or drag on the ground."

➤SURVEY: PETS HELPING PEOPLE GET THROUGH PANDEMIC: A new poll found that pets are boosting their owners' morale and helping them get through the coronavirus pandemic. The survey by OnePoll for Zoetis Petcare found that 72 percent of pet owners said they wouldn't have been able to get through the pandemic without their pet's company, and 81 percent said it's made them feel even closer to their pet than before. Seventy percent said they feel like they know their pet a lot better since the pandemic began, and 72 percent said they're taking better care of their pet their ever, including giving them more treats, taking them on more walks, and cuddling or petting them more often.


➤MURRAY SCORES 50 POINTS IN NUGGETS' WIN, SECOND TIME IN SERIES: The Denver Nuggets' Jamal Murray scored 50 points in Denver's 119-107 win over the Utah Jazz yesterday that forced a Game 7 in their first-round playoff series, the second time Murray has scored 50 points during the series. Utah's Donovan Mitchell has also scored at least 50 points twice in the series. The only other NBA players with two 50-point games in the same postseason are Michael Jordan, who did it twice, Wilt Chamberlain and Allen Iverson.

➤OAKLAND-HOUSTON MLB GAME POSTPONED AFTER A'S HAVE POSITIVE CORONAVIRUS TEST: MLB postponed yesterday's scheduled game between the Oakland A's and the Houston Astros after a member of the Oakland organization tested positive for the coronavirus. Not revealed was whether the test came from a player, coach, or another member of the organization. The A’s said the team conducted testing and contact tracing for the entire traveling party and would self-isolate in Houston.

➤U.S. OPEN BEGINS TODAY IN NEW YORK: Tennis' U.S. Open will begin today (August 31st) in Queens, New York, taking place on schedule in New York City, once the U.S. epicenter of the coronavirus pandemic. However, there will be no spectators in the stands.

A 66-FOOT PUTT FOR THE CHAMPIONSHIP!

Several top players decided not to participate because of the pandemic, including women's world Number 1 Ash Barty, and last year's men's champion Rafael Nadal, and Benoit Paire of France, who was seeded 17th among the men, has dropped out after testing positive for the coronavirus. The U.S. Open is the first major being played since the pandemic began, with Wimbledon having been canceled for the first time in 75 years and the French Open postponed to late September.