When Will Consumers Feel Safe?

When Morning Consult first began tracking consumer comfort levels during lockdowns, adults in the United States were steadily growing more confident that they would be able to safely return to public spaces in the near future.

But now, as we near the end of summer, an analysis of trend data shows that after a brief downturn in comfort, the public’s attitudes have not budged significantly for 10 weeks — a warning sign for many consumer-facing brands hoping that customer habits would return to pre-pandemic normalcy over the course of the summer.

Since the early weeks of Morning Consult’s consumer comfort level tracking, respondents have nearly always expressed the most safety in eating out at restaurants, reaching a high of 41 percent in late May.

But the share of U.S. adults who say they feel safe dining out has dropped consistently throughout August, reaching a three-month low at 31 percent the week of Aug. 21-23, then leveling out at the end of the month.

By mid-June, consumers’ comfort levels with activities such as going to an amusement park or a shopping mall were on the upswing, with the share of people expressing safety doubling in many cases since late April, when Morning Consult first began tracking. But as the number of confirmed coronavirus cases began to surge in the latter half of June, consumers became less comfortable with returning to leisure activities and have reported little change in their opinions since. 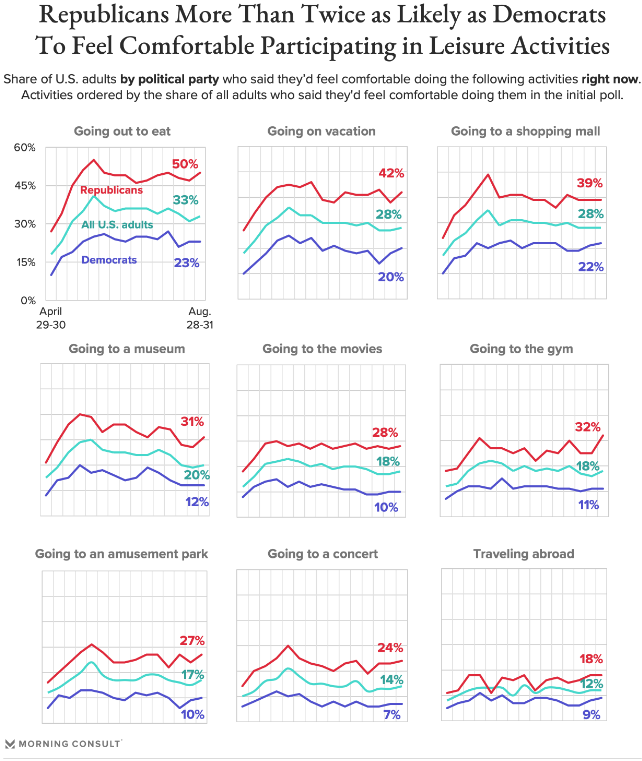 On average, Republicans are 2.5 times as likely as Democrats to say they feel safe doing a number of activities listed in the poll, as the gap between parties increased slightly after showing signs of closing last week.
Posted 1:32:00 AM