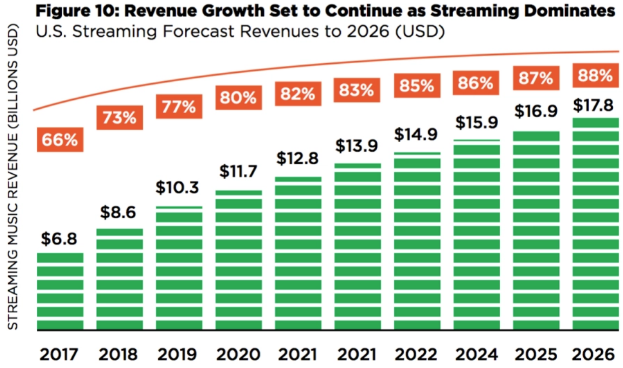 American music fans racked up an unprecedented one trillion streams in 2019, drawing in $28.2 million per day for the U.S. music industry. Yet that’s still not enough to take the industry back to its CD-era glory days, reports Rolling Stone.

The Digital Music Association (DiMA) — a trade body whose membership comprises Amazon, Apple, Pandora, Spotify, and YouTube — released a highly optimistic annual report on Thursday that forecasts strong continued growth in the U.S. music market, despite COVID-19’s derailment of most entertainment sectors in 2020.

The 43-page report, assembled by Midia Research using consumer surveys and data from the member companies, points to digital music subscriptions, technological innovations, and diversified audio product offerings as drivers of that growth, and it predicts that U.S. music revenue will finally topple its heights-of-the-CD-empire record of $14.6 billion by 2025. (In 2019, revenue reached $11 billion, with about 80% of that coming from streaming.)

“If mapping the U.S. market against other market’s paths to maturity, we should’ve seen growth slowing more quickly than it is,” Mark Mulligan, managing director of Midia, tells Rolling Stone. “The U.S. is a late-stage streaming market and growth is slowing. Penetration is beginning to tap out. The competitive landscape is very well-defined. But there’s still this significant amount of momentum.”
Posted 1:38:00 AM