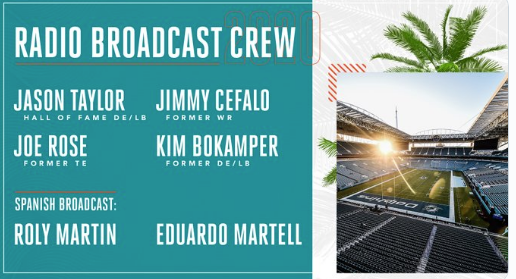 One Miami Dolphins legend will be replacing another in the team’s radio broadcast as an analyst, reports The Sun-Sentinel.

Jason Taylor, a six-time Pro Bowler who was named to the Hall of Fame in 2017, will be replacing former Dolphins quarterback Bob Griese for Miami’s radio broadcast of the Dolphins’ 16 regular-season games.

Griese, who is 75, has decided to step away from broadcasting games.

The move comes after Taylor spent last year’s preseason in the television booth working for CBS4, broadcasting games with Griese and working alongside Dick Stockton.

He’s previously attended training camps working as a volunteer coach for the Dolphins, helping out with the pass rushers. He’s spent the past few years working as an assistant coach with St. Thomas Aquinas High, the school his children attend.

Taylor has previously worked as a studio analyst for NBC Sports and ESPN, and he spent the 2018 season working as a Sunday Night Football analyst on Westwood One’s radio broadcasts.

Univision Deportes Radio  1140AM is the Dolphins official Spanish radio broadcasting partner and Roly Martin and Eduardo Martell will return for those broadcasts.
Posted 2:02:00 AM