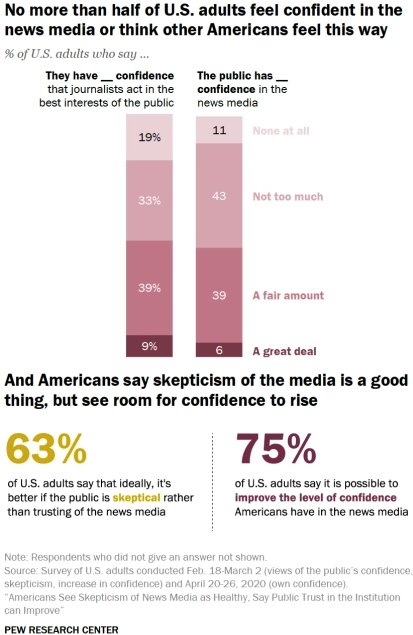 A major new Pew Research Center analysis marks the culmination of a yearlong exploration of Americans’ views of the news media. Building on previous research focused on the relationship between political party identification and COVID-19 on trust in the media, the current study finds that while large swaths of the public express negative views toward journalists and news organizations, U.S. adults are also open-minded about the possibility that their trust in the industry could improve.

The analysis finds that there is indeed room for growth – no more than half of U.S. adults have confidence that journalists act in the best interests of the public or think that other Americans have confidence in the institution. And while most Americans (61%) expect the news they get to be accurate, nearly seven-in-ten (69%) say news organizations try to cover up mistakes when they do happen.

Americans see a range of reasons why mistakes make their way into news reporting, from malicious to more accidental. For example, many U.S. adults say that careless reporting (55%) or a desire to mislead the public (44%) are major factors behind significant reporting errors. That's in addition to the 53% who say that the accelerated pace of breaking news may be responsible for mistakes.

Public skepticism toward the media does not appear to be purely antagonistic. In fact, most Americans view some level of wariness toward the news media as healthy for a well-functioning society – roughly two-thirds of Americans (63%) believe that it is better for society if the public is skeptical of the news media. This is far higher than the portion who say it is better if the public is trusting of the news media (36%). A focus group member (Man, age 34) expressed this sentiment saying, “You don’t want to not trust them [the news media] no matter what, but you don’t want to be on the other side and trust a news organization one hundred percent of the time.”

Still, three-quarters of Americans (75%) say it is possible for the public to increase its level of confidence in the news media, compared with about a quarter (24%) who say it is not possible. This view is largely shared by members of both political parties, as well as across demographic groups.

Primarily based on a survey of 10,300 U.S. adults conducted Feb. 18 to March 2, 2020 on Pew Research Center’s American Trends Panel, the survey questionnaire (and this analysis) are also informed by a series of ten focus groups conducted among U.S. adults with a range of demographic and media-related traits across three U.S. cities in November 2019: Houston, Texas; St. Louis, Missouri; and Charlotte, North Carolina.

Among the key findings from this in-depth analysis of trust in the news media: