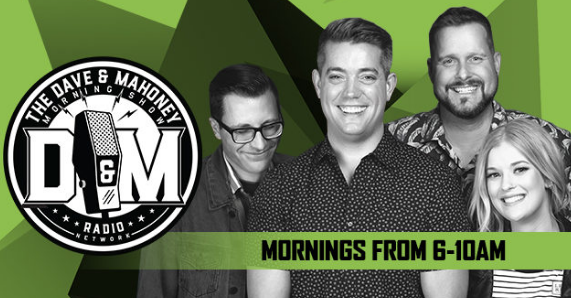 The Dave & Mahoney Show, hosted by Dave Farra and Jason Mahoney along with Audrey Drake and producer Ian Schebel, originates from Entercom Alternative KXTE-FM (X107.5)/Las Vegas and has been a top ratings performer for more than a decade.

Farra, the host and Executive Producer of the show says, “Alpha Media is a highly respected broadcasting company with an incredible track record of building winning brands, and P.K. (ALT 105.1 Content Director Phil Kukawinski) is one of the sharpest programmers in the format today.”

Co-host Jason Mahoney adds, “Plus Louisville is home to Muhammad Ali, The Kentucky Derby, and countless bourbons…this is right up our alley. We can’t wait to wake up the great city of Louisville each morning!”

Kukawinski says “I’m incredibly excited to be bringing Dave and Mahoney to ALT 105.1! I’ve been a fan of the show for years and finally had the opportunity to bring it all together. I can’t wait to share the show with Louisville and all of Kentuckiana! (Guess now would be a good time to hide my bourbon from the guys, too).”

ALT 105.1 is now the 6th market, including the flagship station X107.5 in Las Vegas, to syndicate the Dave & Mahoney Morning Show. For more information about syndicating The Dave And Mahoney Show please contact; syndication@DaveAndMahoney.com
Posted 10:33:00 AM