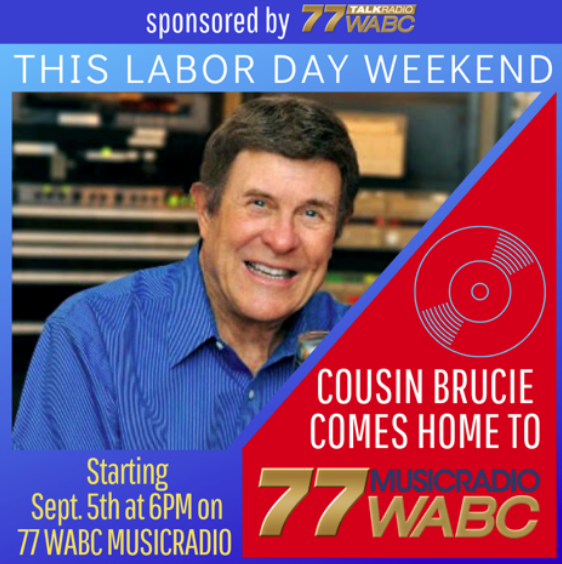 Legendary radio personality Bruce Morrow, known for introducing America to The Beatles, Motown, 60s soul and more, is back with Cousin Brucie’s Saturday Night Rock & Roll Party. Starting tonight, he'll air every Saturday night from 6 to 9 pm ET on www.wabcradio.com and on the radio station 77WABC in New York — the one that he helped build back in 1961.

In addition to hearing the show live around the country on the station’s website, listeners can also stream the show on the WABC App.

“Cousins, this is literally one of the most exciting projects of my life,” said Morrow. “It completes a circle … a career circle. It all started at WABC, and here we are all these years later, and the magic is still here. And what magic we’re going to make!”

The station and its digital platforms are owned by John Catsimatidis’ Red Apple Media.

“Brucie is a national treasure and talent. Listeners everywhere can now hear this radio icon and their favorite music from the early days of rock and roll on our radio stations and streaming on our digital platforms,” said Catsimatidis. “Red Apple Media is about bringing the best in information and entertainment to New York and all of America however they want to listen — on their phone, radio, smart speaker or computer.”

Most recently, Cousin Brucie was heard by paid subscribers on SiriusXM satellite radio, where he hosted his Wednesday and Saturday night programs since 2005.

With his return to 77WABC, Cousin Brucie’s shows are freely accessible to his loyal listeners across the country.

Bruce Morrow (Cousin Brucie) is an acclaimed and beloved broadcaster of over 50 years and was born in Brooklyn and grew up a true son of New York City.

After early jobs in Bermuda and various other markets, he joined 77WABC in 1961, just as rock and roll music was becoming popular and a few years ahead of the British Invasion that brought The Beatles, The Rolling Stones and more.

In the ’80s and ’90s, Cousin Brucie was heard on WCBS-FM, New York’s oldies station, at the time, where he hosted the Saturday Night Dance Party, The Top 15 Yesterday and Today Countdown and The Yearbook.