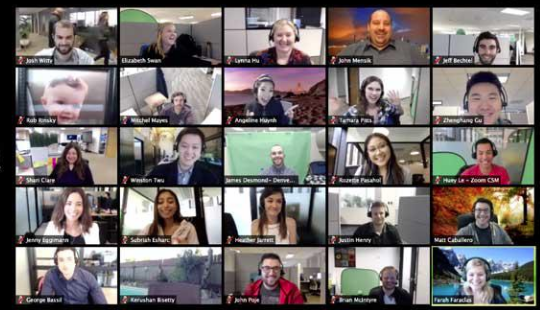 Zoom Video Communications Inc. again raised its full-year outlook for a second time during the pandemic, cementing its position as one of the biggest corporate winners from the shift to working from home and remote schooling. reports The Wall Street Journal.

The coronavirus pandemic almost overnight turned San Jose, Calif.-based Zoom from a niche application used by companies to a tool many Americans have come to rely on to stay connected with co-workers, family and friends. Its user numbers have skyrocketed.

Zoom on Monday reported sales of $663.5 million in the July quarter, up from $145.8 million a year earlier, as it posted a profit of $185.7 million. Analysts surveyed by FactSet had expected sales of $500 million and net income of $134 million for the three months ended July 31.

Zoom on Monday said the number of its most lucrative customers more than doubled from a year ago. But its appeal has become increasingly broad based. Smaller companies, with 10 or fewer employees, accounted for around 20% of sales about six months ago and now represent 36% of revenue.

The pandemic has driven many companies to embrace digital tools on an accelerated timeline. That has lifted the fortunes of cloud-service providers such as Amazon.com Inc. and Microsoft Corp., as well as the companies that run on the cloud, such as Salesforce.com Inc., which last week raised its full-year outlook, and Zoom.

The global boost in popularity has put Zoom in the battle for how businesses work remotely, pitting the company against far larger rivals such as Microsoft and Facebook Inc.